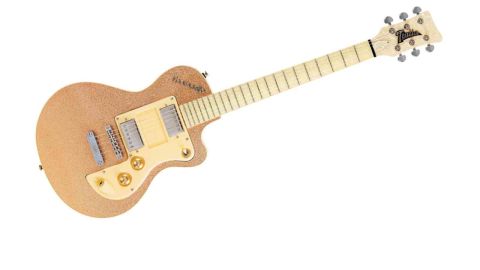 Highly detailed retro design and fits our 'different' brief. Those pickups won't be for everyone though, nor the livery.

Squarely based on a Hagstrom P46 Deluxe, including its finish, the Maranello also closely apes a Les Paul outline (despite its slightly fuller waist and less hooked treble horn), along with its dual-covered humbuckers, tune-o-matic-style bridge and more original flat-topped stud tailpiece.

It has a longer scale than an LP 635mm (25 inches), but that shouldn't ruin the party. And dressed like this it's clearly party time!

An alder body with a very slightly dished top and overall depth of 51mm is entirely encased in thin plastic: mother-of-toilet-seat to the back and sides, a drum-covering-like gold sparkle to the cream bound top.

The neck (also encased in the same plastic as the back) is actually maple and attaches to the body with a very Les Paul-like wide tenon, but instead of being glued in, there are two Allen-key'd machine bolts under a cover plate that thread into inserts in the neck creating a very stable, rigid join.

All the electronics are mounted on a mounded acrylic- like clear plastic, which is cream-painted on its underside. Underneath this assembly, the body is hollowed to a depth of around 25mm - adding as much air to the single-cut design as PRS' SE Zach Myers http://www.musicradar.com/reviews/guitars/prs-se-zach-myers-601055.

While the controls are very standard, the humbuckers, according to Italia designer Trevor Wilkinson, use ceramic magnets and the bridge pickup especially has a lot of wire - and consequently a high DC resistance reading - to tame the highs of the strong ceramic magnet.

Strapped on, the Maranello feels slightly neck heavy but nothing serious. The neck has a nicely full deep-ish 'C' profile and the plastic covering feels like a gloss finished all-maple Fender neck, if we're honest.

Starting on our clean amp, we checked the tone was full up. It's not the clearest sound we're ever heard - some way from an original PAF - but there's good balance to the pickups and some actually quite round-nosed Ricky-like jangle with both on.

Show Signor Maranello a cranked amp, however, and we get thumping midrange sizzle that certainly recalls DiMarzio's game-changing Super Distortion.

With the current 'less output is more' being the hipster's choice, the Maranello is not only polarising in its dress sense, but will be in its voice, too. For some of us of a certain age who remember those 70s Super Distortion tones, however, it's a crackin' slice of guilty pleasure pie.

Being different is the mantra that's sustained Italia over the past 15 years. Even the standard Maranello comes in some pretty wacky colours, but who says we all have to play sunburst single- cuts? A fun guitar to pick up mid-set with that 70s power-rock tone and a slightly funky edge. Not as daft as it looks!