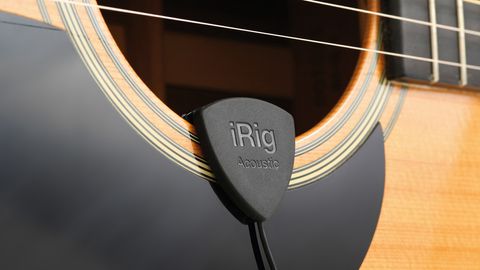 A solid package at a decent price that provides a good mobile recording option.

The best way to record an acoustic is with a decent condenser mic, but that's a bit of a faff if you're in a hurry.

Thankfully, IK has put its brainiacs on the case, and the result is the first iRig for acoustic players. Like Fishman's Aura technology, the idea is to recreate that detailed condenser tonality with modelling tech.

To achieve this, the iRig is paired with the AmpliTube Acoustic app on an iOS or Android device. There's a free version that offers several presets, or the full version (£7.99) with expanded amp and model options.

The iRig itself is a plectrum- shaped MEMS mic/interface that's easy to secure to the inside of your soundhole. After calibrating our dreadnought with the app (this is vital to ensure you get the right levels) and choosing the 'Friendly' preset, we strum, fingerpick and...it really does present the character of a condenser mic well.

It's surprisingly sensitive, but owing to its positioning on the body it picks up more fretboard finger/string noise than we'd like.

It's still a worthy compromise for anyone who has neither the time or facilities to set up a condenser, and with Audiobus support for use with recording apps as well as AmpliTube's onboard tuner and one-track recorder, this is the firsttime acoustic musicians have an easy hardware and app package to inspire mobile recording.