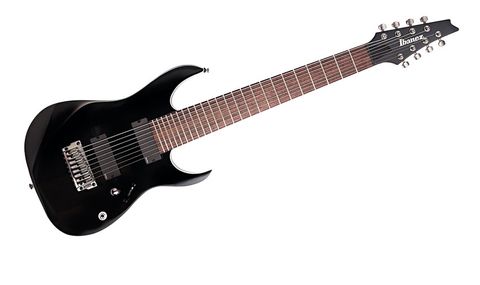 At this price, it's an excellent option, however unwieldy, for those new to eight-strings looking to hone their technique.

The world of eight-string guitar playing has just become slightly easier to access, thanks to the introduction of Ibanez's new back-to-basics Iron Label RGs.

The Ibanez RG series has always been a favourite of metal players, and for obvious reasons. As the archetypal double-cut, it came fresh out the box with everything shredders needed: emaciated maple necks, double-locking vibrato units and hot pickups. The RG was built for speed and could deliver a riff.

But with the Iron Label series, Ibanez has called an EGM of the R&D department to build a range of mid-price electrics in six-, seven- and eight-string models that are strictly metal - not for the jazz guy who cuts loose on the fusion come the middle-eight, or the hair-rock power-ballad wuss.

But to create a monster, you've got to venture off-piste, and here Ibanez has ditched the master tone, leaving just a three-way toggle switch and an on-off kill switch for those weird manual slicer effects (Ibanez calls it a "strobe effect") that Randy Rhoads was so fond of. The result is a series of guitars that embrace minimalism and brutal tone in equal measure.

There is no question that the Iron Label eight-string is the most intimidating guitar in the series. When talking about eight-string guitars, there are always going to be some generic criticisms - these guitars are not for everyone, but then very few are.

What this monster entry to the Iron Label series offers is a really powerful guitar at an entry-level price. There's a 686mm (27-inch) scale length and the eight-string's headstock is an asymmetric spear point, with four tuners on each side; it has a five-piece maple and walnut neck, reinforced with titanium rods; and it's equipped with a pair of high-output EMG 808 humbuckers - active pickups built specifically for eight-string electrics.

From the factory, the RGIR28FE is tuned down half a step, meaning that low eighth string is an F. It takes a while for your ear - let alone your fingers - to adjust to having a low F, which is almost an octave lower than your six-string's low E. And it definitely feels weird, lacking responsiveness and clarity, even with the EMGs.

But what it lacks in note articulation it makes up for in power, and a growl that could test even the most reliable of sphincters. And isn't that why you wanted one in the first place?