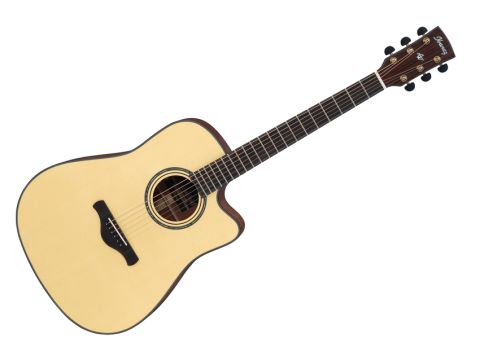 You'd be forgiven for not being aware that Ibanez makes acoustic guitars.

Yes, as well as rib-bruising widdle machines there's a side to the Japanese luthier that takes in sensitive troubadours, the quiet bits in power ballads and even folk music.

"Hit the guitar with some feeling and it comes alive."

That said, you'll still know this is an Ibanez. The neck on this model is a slim specimen that's only a generous Sunday lunch fatter than that found on Steve Vai's signature JEM (in metric, that's 22mm at the first fret compared with 18mm on the JEM).

It's comfortably rounded at the lower frets and flattens off considerably towards the body, and that big cutaway enables you to get up close to the business end of the fretboard. Make no mistake - this guitar is meant for more than just playing Kumbaya by the campfire.

In the best anatomical tradition that gorgeous, playable mahogany neck is joined to an equally beautiful body. This is an all-solid wood machine, with mahogany back and sides and a beautiful, shimmery Engelmann spruce top. There are no rough edges here and no sharp fret edges that might snag the sleeve of your Aran jumper.

Ibanez has followed the traditional dreadnought scale length of 25½ inches, which gives a nice snap and snarl to the strings, rather than the mellower feel that results from the 24¾" scale length used by Gibson. Combine this with a bone rather than plastic nut and bridge, a rosewood fingerboard and that spruce top, and you get an incredibly crisp, cutting sound with oodles of treble.

Tickle the strings for a crystal clear top end and chunky bass rather than mid-range - exactly what we'd expect from a dreadnought.

But the AW3010CE doesn't want to be tickled: it's a kinky little thing and it wants to be spanked. Thrash out some open chords, barre the neck up and down the fretboard and hit the guitar with some feeling and it comes alive.

That spruce top kicks out a hell of a sound, fizzing and vibrating with every touch - and the more effort you put in, the more you get out. Once you get over the novelty of this it really makes you think about dynamics, about how you're going to play, not just what.

The amplified tone doesn't match the acoustic sound, but if it did this guitar would cost a lot more and have an ugly great rectangle hacked out of the side, so we can't complain. Instead, it's best to think of it as a great acoustic that you just happen to be able to plug in when your band mates bugger off for a drink mid-set.

This really is a peach of an instrument. It knocks the socks off most of the competitors in its price range, and it's hot on the heels of guitars that cost far more.