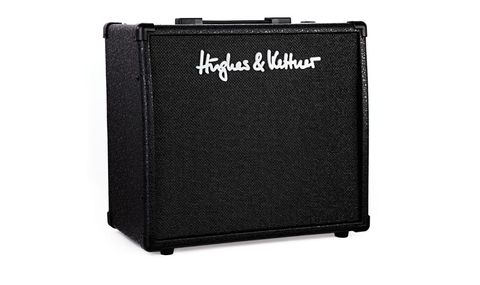 Add a few pedals and you'll be left singing the unassuming solid-state's praises, whatever your amp background.

In recent years, modelling amps have supplanted the humble solid-state combo. That's a shame, because some of the most iconic amps of all time have been transistor-based - the Roland JC-120 Jazz Chorus is all over Metallica recordings, while Pantera relied on Dimebag's Randall-powered brutality.

Fortunately, H&K has thrown its hat into the ring with the Edition Blue 60-DFX, an all-analogue combo with digital effects. The key to the 60-DFX lies in its simplicity: two channels, one three-band EQ, plus effects knobs to control the built-in chorus, flanger, delay and reverb.

You also get a headphone out plus the archaically named CD/Tape Input for home practice. And although the combo itself looks a little underwhelming, it's reasonably compact and lightweight while still providing enough grunt for small gigs.

Flick the amp's power switch and you're not only greeted with H&K's trademark blue glow, but also a clean channel that's warm and engaging, and responds well to changes in tone, pickups and picking intensity. It's also a bit vanilla, but that makes it an ideal platform for pedals. Crank the clean volume and lower the master, and you get a satisfying crunch, too.

Of course, getting decent cleans from a solid-state amp is easy; where many transistor-based combos fall short is when you kick in the distortion. The Edition Blue's lead channel starts off admirably. It's tight, gritty and cleans up well with the guitar's volume knob, making it ideal for blues.

However, crank up the gain and the amp loses some of its sheen - it's still more touch-sensitive than most, but like many solid-states, it's a little brittle. Still, as with the clean channel, the advantage of neutral dirt is that it works across genres, and the EQ works wonders for sculpting scooped metal and mid-boosted classic rock tones.

But for all its flexibility, the amp's shared three-band EQ is frustrating, leading to a compromise between your two favourite sounds. The effects section is hampered by a lack of control, too: there's only one rotary dial for chorus, flanger and delay, plus a separate effects level knob.

Each of the three effects takes up a third of the rotary, and turning it up within its given region increases the rate. That's fine for the warbly chorus and flanger, but recalling a delay tempo or setting its feedback is near impossible. The effects' sounds are all perfectly usable (including the splashy reverb), but the delay is too difficult to dial in for live use.

With the Edition Blue, Hughes & Kettner has made a good stab at creating a new solid-state combo. It's more touch-sensitive than most, which makes it well suited to clean and lightly overdriven sounds, although its high-gain tones leave a little to be desired. But add a few pedals - and a few gigs - and you'll be left singing the unassuming solid-state's praises, whatever your amp background.