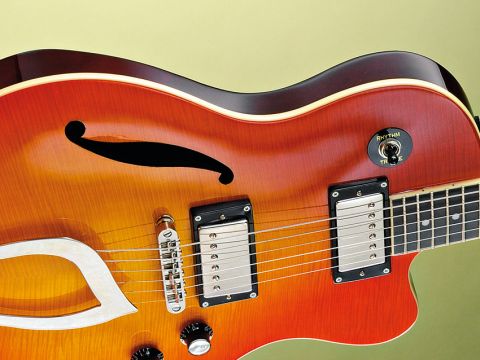 The Hagstrom Deluxe-F comes from the company's Vintage series, suggesting it's a revival of an old model. However, the design of this instrument has no direct link to any earlier efforts, although the shape hints at Hagstrom's first electrics and is shared with the all-solid standard Deluxe.

The F suffix, presumably, is an indication of the newcomer's main difference, which is a semi-solid body, sporting a single f-hole.

The tuners are another common factor; adorned with art deco-style buttons that also echo the D'Aquisto association, although these are smaller and more string winder-friendly.

The Deluxe-F sports a shallow radius synthetic fretboard, made of what Hagstrom calls 'Resinator Wood'. This looks like ebony, but is actually a timber composite intended to provide the playing properties of the real thing. Neatly bound with cream plastic, it feels suitably sleek and hopefully a future re-fret won't prove problematic.

Talking of frets, these are medium gauge and number 22, all nicely seated and polished, but most ends are somewhat sharp - an unfriendly aspect that obviously can't be blamed on fingerboard shrinkage!

The truss-rod cover accesses another piece of the past: the company's patented H-expander truss rod design. Past Hagstrom necks have accordingly been much slimmer than many, but the glued-in mahogany example employed on the Deluxe-F is meatier, with a mainstream, if slightly shallow 'C'-profile.

The body's mahogany with a carved maple top, but on sunburst versions the latter is faced with a tightly flamed veneer. This looks effective on the amber shaded review example, contrasting the translucent dark cherry used elsewhere.

The only cosmetic criticism concerns the single f-hole, which is unbound and rather rough-edged. The internal airspace undoubtedly helps to lighten the load, although the Deluxe-F still weighs in at 3.5kg, but rear waist contouring makes playing life more comfortable.

The F is fitted with chrome-covered, Hagstrom Custom 60 humbuckers. Controls consist of a pickup selector on the left upper bout with master volume and tone controls mounted diagonally opposite.

The Deluxe-F also features a mini-type toggle just aft of the latter and this knocks out the inner half of each humbucker to supply single-coil sounds.

We found the three-way selector to be too close to the neck pickup, so it's easily hit when strumming. The two pots are positioned near to the bridge humbucker and also run the risk of contact-induced alterations. In addition, there's not much operating space, so the controls look and feel cramped.

The bridge is based on the time-tested Gibson Tune-o-Matic design, but longer-travel saddles allow greater intonation adjustments.

The tailpiece is another distinguishing feature of the Deluxe-F, being a large trapeze-type design decorated with the company crest and a direct copy of an original component. It looks okay on more substantial Hagstroms like the Viking, but seems out of proportion on the small-bodied Deluxe-F.

The extra internal airspace contributes very little to a thin acoustic tonality, although it does add a mite more volume. Sustain is slightly down compared to a standard Deluxe, which could be due to the tailpiece, but the differences don't really affect amplified performance.

The Custom 60 humbuckers pack quite a punch, allied to muscular mid-range. The neck pickup backs this up with beefy bass and a tight-toned treble, while the bridge position brings in a more aggressive top-end and the centre position blends both to combine depth and chime.

Selecting single-coil mode emasculates the sound via radically reduced output. Okay, there's some useful clang and ring, but the middle position seems too hollowed compared to the individual options. The Deluxe-F works well with added gain and delivery stays well defined, even when subjected to large doses of dirt, while the airier body doesn't encourage unwanted feedback.

While this is a capable and versatile instrument, concerns about poor build quality and design weigh heavily, as does the paper-thin single-coil clean tones. If you're after a Hagstrom but feel that you want something with a more vintage look however, then this is worth checking out.