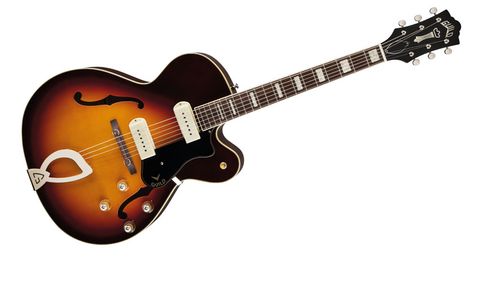 Since its purchase by Fender in 1995, the Guild Guitar Company has rarely appeared to be a high priority for the biggest F-word in Guitarland. Acoustic guitar production has shifted from factory to factory, but it has at least been continuous; for nearly a decade now, Guild electrics have been out of production and all but invisible. However, at this year's NAMM show in Anaheim, the seeds of a revival were sown...

Alongside the top dollar US-made American Patriarch Series, NAMM 2013 saw Guild launch the Newark St Collection: eight classic Guild models from the 1950s and 60s reissued under a banner inspired by the Hoboken, New Jersey location of the company's factory before the whole operation was sold to the Avnet Corporation and relocated to Rhode Island in 1966.

Although the Newark St Collection is manufactured in Korea, some 7,000 miles away from the address that gave it its name, a real effort has been made to get these guitars right when it comes to balancing vintage accuracy, the demands of modern players and the need to work to a price.

Fender's Vice President of Product Marketing, Mike Lewis - a Guild owner himself in the 60s - masterminded the selection of a range of eight instruments that represent some of the most popular and sought-after guitars that Guild ever built.

The X-175 Manhattan is absolutely a child of the 50s; this is a six-string with few mod cons and no obvious safety net. The floating rosewood bridge seems arcane in 2013, but intonation compensation and thumbwheels for height adjustment at least allow some degree of adjustment.

Straight out of the box, it's a handsome beast, but tough to keep in tune. That said, even played acoustically, that bridge definitely imparts a woody character of its own and if you aren't hitting the guitar too hard it's possible to make it work.

At the headstock end, Grover Sta-Tite tuners stay tight and look the part, but we'd have to either pin the bridge base or use the Brian Setzer carpet tape method to keep it in place before we'd risk the X-175 in a live environment.

A careless right hand or even an extreme string bend can make it wander slightly, which tends to throw intonation and tuning out beyond acceptable tolerances. We can't help wondering why features such as jumbo frets have been incorporated to appease modern players only for the bridge to be left unpinned.

That said, the combination of a 9.5-inch (241mm) fingerboard radius, a vintage soft U-shaped neck profile and big frets make for a really inviting playing surface - just be prepared to allow this guitar to dictate the way you play to some extent.

Another pragmatic departure from the original 1950s spec can be found in the shape of the peghead. For almost the first decade of production, Guild used an 'open book'-style headstock silhouette very close to that used by Gibson and Epiphone. It's no great surprise given that many members of Guild's early workforce and indeed co-founder George Mann were formerly on the Epiphone payroll.

The only exception to this rule in the 1950s was the Johnny Smith Award Model in 1956, which included a raised section at the centre of the top in order to denote the guitar's high-end status. A slightly softened version of this headstock shape was rolled out across other models in 1962 and became the standard within two years, and it's that shape that you see here.

All Fender-era Guilds, including the Newark St Collection and the high-end US-built American Patriarch Series reissues have stuck to this 'raised' design, presumably to avoid having an awkward conversation with Gibson, which owns the trademark for the 'open book' shape.

It might look like a pure jazzbox, but during recording sessions with the X-175 we managed to unearth a secret rock 'n' roll and R&B voice that's to die for.

Dial in some suitably bright EL84 break-up, add lashings of spring reverb and take it to the bridge (pickup, that is), and it's the kind of sound that begs for stabbing blues licks from the pre-Satisfaction Stones catalogue. Play down near the bridge with a hard pick for best results.

If your tastes are altogether smoother, keep it pretty clean and the X-175 has a real authenticity in the context of jazz, gypsy jazz and Western swing, and we'd bet that the rosewood bridge is a significant contributing factor. There's something deliciously primitive about the 'Frequency Tested' single coils, too.

Grappling with the X-175 feels a little like guitarcheology, but for a player used to more mainstream solid and semi-hollow electrics it's a really interesting left-turn and a very rewarding experience. Indeed, its very quirks and limitations become a source of great inspiration in a studio context.