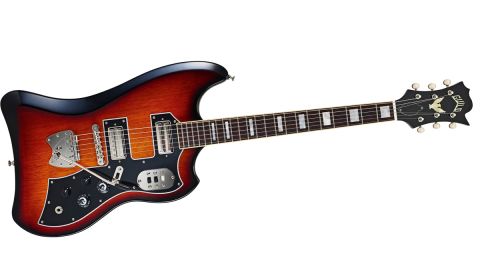 To quote Dan Auerbach's back catalogue, the S-200 T-Bird might be all you ever wanted.

The S-200 T-Bird was first hatched back in 1963, but asides from brief flings with Muddy Waters and Lovin' Spoonful's Zal Yanovsky, in the 60s, it never really got much kudos.

That was, until Black Key Dan Auerbach fell in love with, and subsequently beat the hell out of, a '64 example - cult classic status achieved.

While the T-Bird served as the inspiration for the DeArmond Jet Star from a few years back, this Korean-sourced reissue is the first true recreation of its 60s ancestor. The bizarrely-shaped mahogany body (now minus the built-in stand featured on the original) is topped with a pair of Guild LB-1 'Little Bucker' pickups, a shedload of knobs and switches and a tune-o-matic bridge. Hagström supplied the vibrato units for the original T-Birds, which explains why its old-school Tremar unit  (as fitted to its current RetroScape Series Impala and Condor reissues) has been spec'd here.

And the good news continues with a one-piece 24.75-inch scale mahogany neck and 12-inch radius rosewood fingerboard, 22 well-dressed medium jumbo frets, not to mention that eye-catching asymmetric headstock with its open-back Grover tuners and Thunderbird icon. This smorgasbord of retro cool comes stuffed into a deluxe Guild gigbag.

Thanks to dirty Dan, we know the T-Bird can pull off a filthy punk blues but there's more to this guitar than a fuzz box's perfect date. Our fine feathered friend puts us in mind of another slab-bodied mahogany retro classic: the Gibson SG. That feeling of deja vu continues with the ultra-playable slim 60s D profile neck, with its Gibson-style scale length and fingerboard radius.

Plugging in, the bright-sounding mini-humbuckers pull bags of sustain from the T-Bird's 1.5-inch thick carcass. There's plenty of sparkle and clarity on a clean setting, and that even extends to the neck position, where the pup's low vintage output conspires with the natural brightness of the mahogany body.

Of the various knobs and switches on offer, the low-cut tone capacitor is the most noteworthy.

As its name suggests, this switch sucks the bottom-end out of the circuit to offer more of a single coil tone for added versatility. When it's time to get mucky, you can kick in some overdrive for classic rock rhythm a la AC/DC's Malcolm Young, or beast the gain to evoke Tony Iommi's early Sabbath stuff, or Kim Thayil of Soundgarden, whose brutal tone was achieved on a similarly spec'd SG-style Guild S-100 Polara. The message here is, don't dismiss the T-Bird as some quirky surf guitar.

No matter what genre you nail your flag to, this beautifully made, realistically priced reissue is a perfect choice for those ready to look beyond the usual rock guitar suspects.