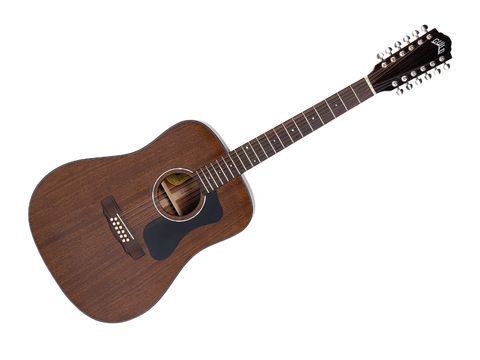 "The factory has worked wonders with the set-up and action, which are both as slinky as you'll find anywhere."

The 12-string D-125-12 harks back to Guild's all-time most popular dreadnought, the D-25, launched in 1968 and over the years made either as an all-mahogany instrument, as here, or with a spruce top. Like early examples, this GAD interpretation has a flat (solid) back, though the company changed this during the seventies to a laminated arched one, ostensibly for sound benefits though just as likely for reasons of cost.

With the body's lustrous finish showing off the mahogany's graining to handsome effect, the guitar - due not least to the extended array of mini die-cast tuners - is fairly heavy, tipping the scales at 2.6kg. It's also slightly neck-heavy - not uncommon on 12s - though not enough to be troublesome.

One constructional detail it shares with the jumbo F-150R is reinforcement around the underside of the soundhole, which gives the impression of a double-thickness top. Such a measure hasn't been deemed necessary on the OM-style F-130CE.

A minor departure from the other two guitars in neck construction is that, instead of having a single main length, the headstock is scarfed on. Possibly it was felt that such a jointing would be less prone to breakage, given the length of, and stress on, the peghead.

Often 12-string necks can be torture but this one is configured to be as player-friendly as possible. The 47.5mm nut span is par for the genre; the profile is a bit fuller to help counter the extra string pull, but is still comfortably shallow; and well considered spacing between the double courses enables pretty accurate picking.

The factory has worked wonders with the set-up and action - 1.6mm treble, 1.9mm bass at the octave - which are both as slinky as you'll find anywhere and only occasionally a tad clanky. Intonation stays reassuringly sure-footed as you progress up the 'board, something that definitely can't be taken for granted on 12s.

Welcome to the world of joyous jangle. Yes, this Guild thrums and sparkles like a good 'un, so much so that you just want to keep strumming the thing.

It arguably could score even higher on the satisfaction index with a tad more infusing warmth via the low end, but frankly that's being dead picky because it's such an enjoyably sonorous instrument to get stuck into as it stands.

The are detail aspects, compared with the previous series, that reflect Guild's keeping a beady eye on production costs: loss of the Chesterfield motif, satin rather than gloss necks, and plastic not wood bindings. But none of these ought to be a deal-breaker because essential quality remains tip-top. The D-125-12 is, simply, a wow, not just for being a great, easy-playing 12-string but for its extremely keen price. If the rest of the series musters similar merits, continued success for the GADs is a cert.