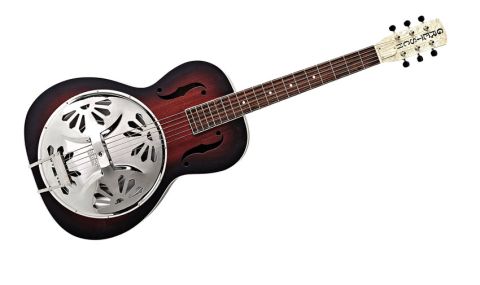 Great tone in an affordable package.

Gretsch's Roots Collection is allowing the firm to don a new guise as a folk-friendly brand. One of the first off the line is the G9220 Bobtail Round-Neck AE resonator.

Well, the new Roots Collection swaps Gretsch's typecast Cadillac-and-Cherry Coke vibe for a down-home pickup truck and moonshine range of acoustics, resonators, mandolins and other folky instruments. The launch of the range comes at a time when roots instruments are enjoying a huge resurgence in popularity.

If resonator guitars didn't already exist, some steampunk fanatic would have knocked one together eventually. Those guys love over-engineered parts; and the resonator in our G9220 Bobtail is basically a mechanical speaker cone spun from 99 per cent pure Eastern European aluminium, which helps project the sound and gives the guitar its unique tone.

The Bobtail is available in Square- and Round-Neck formats. Square-Neck resonators rest face-up on your lap. They feature a very high action and are used exclusively for slide - usually by bluegrass players. Round-Neck models can be played like conventional acoustics, and are very popular with the blues fraternity.

That said, 'Round-Neck' is actually a bit of a misnomer for our Bobtail. The glued-in mahogany neck has a V profile that comes to more of a pronounced taper than the softer profile of, say, a Martin 'modified V' neck. The playability of the neck is further enhanced by its 400mm (15.75-inch) radius rosewood fingerboard and 19 beautifully finished medium-jumbo frets.

The Bobtail comes loaded with a Fishman Nashville pickup. Developed in association with star luthier Paul Beard, the pickup is discretely attached to the resonator cone. A combined jack socket/strap button sorts the output.

The Bobtail has plenty of vintage-style appointments. The nickel-plated Poinsettia-design resonator cover plate, Grover Sta-Tite tuners and Art Deco soundholes are crowned by a pearloid headstock fascia lifted from the classic Gretsch Synchromatic archtops of yore.

A resonator has always been the easiest way to bag some classic Delta blues and bluegrass tones; the Bobtail just makes it more affordable. We did compare the Bobtail to the new G9240 Alligator Biscuit Roundneck model, and while the Alligator pumps out a swampy twang that's not far from the sound of a banjo, the Bobtail is more well-rounded (a bit more Romeo And Juliet) with less of the strangulated note decay of the Alligator. You'd be advised to try the entire Roots Collection range to make sure you get the tone you need.

While some might struggle with the V profile neck, it's worth persevering. In our experience, the Bobtail's neck felt like an old friend remarkably quickly and thw action worked great for both fingerstyle and slide.

The onboard pickup does a pretty good job of reproducing the sound of the resonator, but it is passive. And although Fishman does offer an active version, you'd have to remove the cone to replace the battery, so we'd recommend an external preamp if the passive pickup doesn't do it for you.

The Bobtail is definitely inspiring. The quality of tone, playability, construction - and, yes, serious eye candy - make it the best resonator in its class, in our opinion. In summary, Gretsch might be best known for rock 'n' roll machines, but it has nailed the rustic stuff with this Roots Collection.