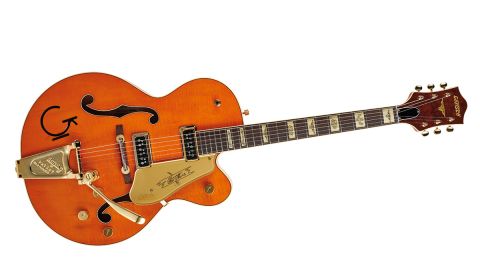 The Chet Atkins G6120T- 55GE hollowbody with its lighter build and those DynaSonic-style single coils, really gets to the essence of the 'Gretsch sound'.

Being a heritage brand in 2016 can't be simple. If Fender strays too far from its classics, we're not happy.

Likewise, Gibson - or virtually any other brand that had a part to play back in the formative years of rock 'n' roll. Gretsch is certainly restrained by its past, even though its classic hollowbodies have been used in every mainstream musical genre from the 60s to the present day. So, what to do?

Well, keep that oh-so-classic aesthetic in place, but make changes under the hood to keep the modern player in mind. In a nutshell, that duality is Gretsch in 2016. If you want a pro-level 'reissue', we now have the Reissue models.

Broadly speaking, the 10-strong reissue models stick to the various specs of yesteryear, with subtle concessions to the modern player: we get TV Jones pickups, aged binding and inlays, pinned bridges (where applicable), bone nuts, 'Squeezebox' paper-in-oil capacitors with a treble-bleed circuit (on the master volume only), and vintage thick pickguards.

Irrespective of its history, this nitro- finished beauty is superbly built. It's not aged in any way, and has none of the construction quirks and blips that you'll find on an original piece.

It's entirely built from laminated maple, the top's facing slightly flamed, and there are even a few marks in the wood: one by the lower tip of the treble-side wide f-hole looks like an arrow - very in keeping with the control knob motifs and Western cattle-and-cactus inlays and headstock logo.

The cream binding around the body, 'board and head is all remarkably clean and matches those aged block inlays to a T. The neck is two-piece maple, with a central thin contrasting veneer and additional headstock wings, and the see-through light-orange finish leaves nowhere to hide tooling marks and the like, though we can't see any.

It's perhaps a little heavier than some early examples we've played, although, like many instruments of this period, variation seems much wider than today's more consistent builds.

Hardware is gleamingly gold-plated, with the exception of the compensated aluminium bridge on its pinned base. Pickups are TV Jones's T-Armonds, faithful recreations of the original DeArmond single coils that pre-dated the Filter'Tron, while the 'Tone-Pot' circuit controlsoffer probably the most common Gretsch setup, certainly of contemporary times: a three-way toggle pickup selector, individual pickup volumes, a master tone and a master volume on the single horn.