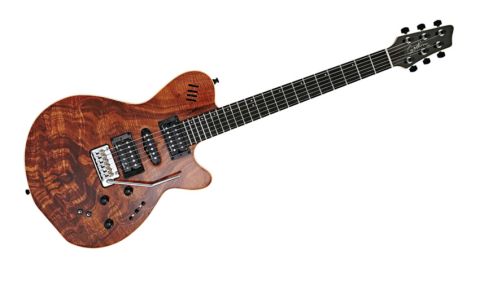 A well-priced 'three-voice' super guitar, with sound options that are virtually limitless via the SA output.

Godin's flagship 'super' guitar, this xtSA is one of 10 of the company's Synth Access (SA) guitars, the majority of which are actually nylon-strings. This fact clearly illustrates the type of player - in Godin's eyes - who might want to experiment with all things MIDI.

Of the two other steel-string SA guitars, the Freeway SA offers magnetic sounds, too, but has piezo output, while the LGX-SA, like the xtSA, is a 'three-voice' guitar with magnetic, piezo acoustic and Synth Access sounds but with a hardtail bridge.

If you're new to Godin, prepare to be impressed. The koa veneer facing on this sample is dizzyingly attractive; the standard xtSA, if you prefer, has a figured maple veneer facing and comes in a limited choice of translucent colours.

An addition to the koa model is the tasteful cream edge binding, while the all-solid body itself has a silver leaf maple 'centre block' with poplar wings. To be honest, a chambered design would trim its weight - as is, it's a rather chunky-feeling 3.8kg, more Les Paul than Stratocaster.

Conversely, it features a bolt-on mahogany neck, held to the body with four recessed screws, and a uniquely shaped rear chamber. Throw in a very flat edge to the lower bout where the three output sockets sit and the guitar's elongated Les Paul- meets-Telecaster single-cut outline is, well, distinctive.

Back to that mahogany neck, though. While it feels superb, the satin finish does feel very new, so we couldn't resist giving it a quick rub with 0000 wire wool, which - to us at least - gave it instantly more class and took just seconds to achieve.

The ebony 'board is very clean, too, but Godin's advertised 'ergocut' technique (a process that rounds the fingerboard edge) seems slight here. Still, the fret work is pretty faultless, and those offset mini dots down the bass-side of the fingerboard face add subtle class - and they're easier to see in playing position than centre-placed dots. Equally classy is the modern back-angled spliced headstock, which sports a simple black-on-white facing and Godin logo top-lock tuners.

The real heart of the guitar lies with its three voices. On the magnetic side is a trio of Godin pickups in HSH layout controlled by volume and tone. The third pot looks after MIDI volume, with a momentary action mini switch for MIDI duties and a three-way mode switch for magnetic/piezo or both. The piezo's slider controls (volume, bass mid and treble) are on the upper shoulder.

The hexaphonic pickups necessary for the Synth Access are buried in the saddles of the modern two-post vibrato, which is recessed into the top: upbend is a minor 3rd on the G string and down not as far a Floyd, but it's far enough for most of us. Straight out of the box, tuning stability is impressive. It's a technology-laden guitar, for sure. Just wait until you plug in...

Once you get your head around the possibilities, the xtSA is a superb performer. With three-band EQ and volume on the piezo acoustic side it's not hard to tame the expected bright, zingy voice to something a little fuller and darker.

Using the mix output you can easily create some very usable modern jazzy electric/acoustic sounds that conversely work for more modern arpeggio lines, all the time blurring the gap between 'acoustic' and 'electric' sounds.

Taking separate outputs, of course, you can really test the potential by running the sounds to separate amps: a little crunch on the magnetic side and clean 'tracked' acoustic. It works exceedingly well, adding big textures. Plug in a synth, which tracks our technique accurately, and you'll be putting world and oyster in the same sentence.

The mixes certainly add some Fender-like funk, but neither humbucker is split here, and in neck/middle the humbucker seems to slightly overpower the single coil on more gained sounds. Clean, it sits pretty well.

Viewed in the context of the sonic potential, none of this is a problem. Something to watch out for, however, is that vibrato: on the piezo-only or mix sounds, there's a pretty noticeable low-end 'thunk' whenever you touch or accidentally hit the vibrato arm.

The xtSA is one of numerous routes into the world of Synth Access that Godin offers in both steel- and nylon-strung formats. Even without plugging into a synth, its potential is considerable: it's highly functional and cleanly built with sounds that may be a little vanilla, but in conjunction with an effects 'board and a dual-amp setup, it proves quite a tool.