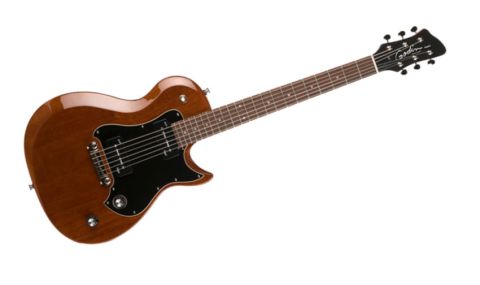 The Empire represents good value, so don't let the lack of a certain headstock logo put you off; this is well worth trying out.

Canadian company Godin may not be the most familiar brand, but it's among the most diverse and its high-quality instruments are often available at prices that belie the lofty standards of construction. The new Richmond Series continues that tradition mixing unashamedly retro curves with modern construction.

There's a whiff of the classic Les Paul Special about the Empire, with the single-cut mahogany body, natural finish and wraparound bridge harking right back to 1955.

However, the subtle body contouring gives it an altogether more modern twist, and there's something very tactile about the guitar. Maybe it's the classic vintage vibe or the sheer woodiness of the natural finish, but we can't see anything wrong with a guitar that demands you pick it up and play. It's light in weight, too, and nicely balanced when strapped on.

Controls are single tone and volume pots, with the latter peeking almost cheekily through the three-ply scratchplate, and the pickups are selected via a traditional three-way toggle.

The tonal character of P-90 pickups is such that they can realistically be used for jazz, blues, classic rock and, at a pinch, harder rock styles, too. With a touch of amp drive, the bridge pickup mixes depth and grunt with sufficient bite, while the neck unit is soupy and warm.

Simple changes of amp setting can give tones the vibe of Keith Richards or even Angus Young and, although probably best suited to blues styles - it makes for a very convincing slide guitar - we're impressed by the tonal versatility on offer.