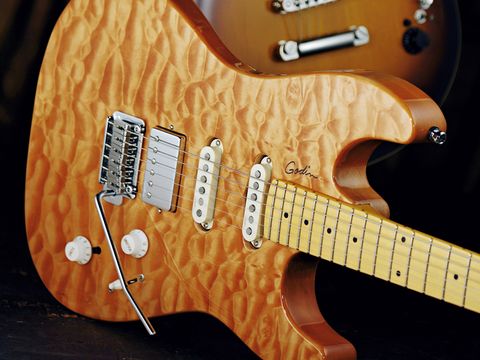 A lovely guitar that's somewhat overshadowed by concerns regarding the USB function.

Even a cursory click around the Godin website shows the huge array of electric guitars in the Canadian firm's catalogue: from out-and-out rockers such as the Velocity to archtop jazzers such as the 5th Avenue.

Here, we have a classic design, albeit with an unmistakable Godin twist - an onboard USB output.

"Yes, we previously came out with our Multiac ACS Nylon USB model to a warm welcome and once again wanted to provide a Canadian-made guitar with USB capability," explains Bunze.

"No external interface is needed with this guitar; you simply go straight from the guitar into your computer or laptop. That's it."

We'll get to how the guitar performs in a tick, but first we'll address the construction. Godin is rightfully proud of its quality control and wood choice, and the Progression's body features a centre section of silver leaf maple, flanked by wings of poplar.

The eye- catching cap is a quilted maple veneer with a similar sliver, albeit of plain maple, on the rear. As is customary for Godin, it's beautifully put together.

Pickups here comprise a Godin Custom humbucker and two GS-2 single-coils, plus the aforementioned HDR, and are controlled by a standard five-way lever pickup selector switch plus single volume and tone pots.

Out of the box, the vibrato is set flush to the body and the single-piece maple neck is truly something to get excited about. It's matte-finished, perfectly smooth and offers an exceedingly comfortable flat-backed 'D'-shape. There's even the choice between maple or rosewood fingerboards at no extra charge.

Typically for an active circuit, the HDR does add its fair share of high-end to the sounds, but in position four, which gives a Mark Knopfler tone, and position two, which is almost a fat Tele style of twang, it's very usable indeed.

At higher gains the bridge humbucker, nowhere near as hot as the Icon's P-Rails, benefits greatly from the HDR's addition of brash high end, making chords really cut through.

In the passive mode the tone is mellower. With our Marshall JTM45 running at a modest level, classic rock riffs sound meaty, even though this is essentially a bolt-on superstrat.

The extent of the USB output's usefulness depends on your software. In programs that allow you to route USB device inputs and outputs separately - Apple's GarageBand for example - you're able to simply plug the guitar straight into the computer via USB, and route its output to your computer speakers, soundcard or what have you.

Where your software won't allow you to route the input and output separately - Guitar Rig 4, for example - you can't plug the guitar straight in. If you do, the guitar will go into the computer, but no sound will come out. To remedy the problem, you'd need a separate USB interface to sit between guitar and computer, which rather negates the point of the USB out in the first place.

When it does work, the freedom offered by direct guitar-to-computer connection is undeniable and the whole recording experience is helped by the guitar's eminent playability. All pickup selections and associated HDR settings are transmitted to your console and there's little doubt as to the overall versatility here, both through studio monitors and a traditional amp.

Still, if the guitar won't interact with the software that you're using, this will be of little comfort - an important point to consider.

The verdict on the Progression Boutique USB isn't clean-cut. There can be no doubt that it plays beautifully and the HDR allows the traditional HSS pickup configuration to really come into its own.

But the fact that the USB can only be used with certain -rather than all - recording programs is a concern. Native Instruments has confirmed that it won't work with Guitar Rig 4 and although there's no doubting the quality of the instrument, the fact that it features an onboard USB shouldn't be your first reason for purchase.

Godin always produces interesting guitars and this continues the trend, albeit with mixed results.