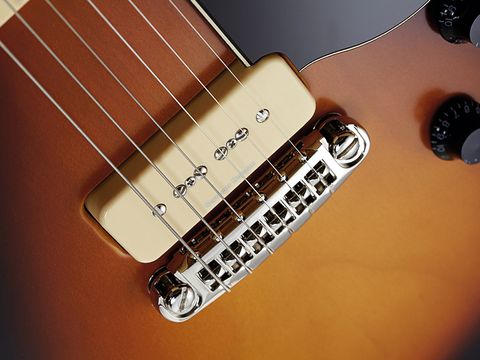 These first guitars were along Fender lines, while later instruments adopted other influences, along with more original thinking. Launched earlier this year, the Core line obviously leans in Gibson's direction, although the end results avoid copy criticisms.

"The Core P-90's fat-sounding single-coils prove to be classy companions."

The Core's headstock recalls the gently curved, slimline shape seen on Gretsch solids from the '50s, while the neatly edged black face bears appropriate Godin and Core logos, plus a proudly prominent 'Made In Canada' legend. The contemporary-type tuners also carry the company brand and are chrome-plated to match the other metalwork, but small black buttons offer an effective cosmetic contrast.

A mahogany neck is glued-in and this follows in the construction footsteps of the Icon line, which was the first to depart from Godin's usual bolt-on neck join.

The fingerboard's shallow 300mm (12-inch) radius and 629mm (24.75-inch) scale length, both Gibson staples, make for bend-friendly blend. The 22 frets fall on the slim side of medium but are all are nicely fitted and finished with consistently sleek tops and snag-free ends. The Graph Tech Tusq nut helps to eliminate tuning-induced creaks or jumps via smooth slots that are cut to optimum action depth.

The Core's body outline is a well-established Godin design, also employed across the company's Icon and Signature series, as well as on certain models in the Performer range. The upper bass bout meets the neck back at the 15th fret, but the deep cutaway contributes to a reasonably easy upper end reach.

In keeping with the Core's no-nonsense image, the body is flat on both front and back, apart from a small amount of rear waist contouring to add some creature comfort. Core construction is actually semi-solid (or 'chambered' at least), although the internal airspace isn't exactly over-apparent in terms of weight, which is an evenly distributed 4kg.

Timber choice maintains the mahogany theme, but the three-piece body boasts a maple face, with the review example's very plain grain visible beneath a somewhat speckled sunburst finish. This colour scheme is contrasted by broad cream binding around the front edge and the rest of the instrument is left in natural brown.

The evenly applied paint job is what Godin calls semi-gloss, although the end result is actually more of a satin sheen. This finish obviously helps to reduce production costs, but normal use will soon buff things up to a full shine.

Appropriately enough, the Core P-90 carries a pair of large, soapbar-style single-coils. As confirmed by the logos on the cream plastic covers, these are by Seymour Duncan, with a Vintage SP90-1 at the neck partnering a Custom SP90-3 located by the bridge.

Both sit in precisely machined, smooth-edged body cavities and it's pleasing to see that pickup angle matches the string slope, which isn't always the case on P-90-equipped instruments.

A black laminate pickguard adds another hint of Gibson and this influence is further emphasised by a control configuration that offers volume and tone per pickup, while a three-way toggle is predictably positioned on the left upper bout. The black control knobs are also from the Gibson school of design, while a cream switch tip matches the P-90 pickups.

Strings secure at a GraphTech ResoMax NW1 bridge/tailpiece, which is a wrapover type mounted on twin, height-adjustable studs. This shapely variation on traditional design incorporates a gently curving rear edge with grooves that keep strings centred, while a comfort conscious top employs six smooth-surfaced saddles. Each is individually adjustable for intonation and a grub screw at each end of the bridge facilitates overall angle alterations.

Strap buttons are Schaller Straplok-style and their small top flange doesn't offer a very secure anchorage. To perform properly, they require their partner strap-mounted locking sections, but, as usual, Godin doesn't include these important other-halves, which is a bit stingy on an £800-plus electric.

The Core's semi-solid chambered construction may not be immediately apparent weight-wise, but it does contribute to an open and quite resonant acoustic character. This suits the Core P-90's fat-sounding single-coils, which prove to be classy companions. There's plenty of poke from both, but delivery stays well balanced across all three switching options.

Performance is actually better mannered than expected, with the pickups not as gruff, rough and ready as some P-90s can be. That said, the neck selection is still suitably sturdy, with a full-fat low end partnering nicely defined highs. The bridge alternative is tighter all round, with a gritty bass aided and abetted by middly muscle and extra attack. Combining both pickups automatically induces hum-cancelling operation, along with a nice blend of twang and chime.

Predictably, the Core P-90 really comes into their own when things start getting dirty. It lends itself to woody blues break-up, but under grubbier conditions it adopts a meaner alter ego, delivering extra grunt and snarl in equal proportions.

Pots prove very effective, with each benefiting from a consistently gradual sweep. The volume controls maintain the same sonic character when reducing output, while the tone controls smoothly slacken off treble content, taking on an almost acoustic quality that keeps the sound essentially mud-free all the way back.

This guitar is stripped to the essentials and is ideal as a rock machine. It succeeds with straight-ahead duties, but is also capable of meeting more subtle demands.

It has to be acknowledged that value for money could be keener - though street pricing ought to go some way to setting this niggle right. With this in mind, the Core series warrants more serious consideration by any player who appreciates an effective, combination of quality and simplicity in their guitar.