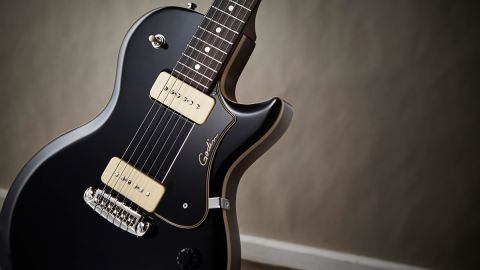 It's a fine guitar to audition some P-90 flavour, especially in rockier settings, but thanks to a great neck pickup and evocative pickup mix, its stylistic potential is much wider.

Up to this point, Godin's three Core models have shared a chambered mahogany slab body with a choice of humbuckers - P-90s or active EMGs -with a 629mm (24.75-inch) scale length and Graph Tech's impressive ResoMax adjustable wrapover bridge.

This year's additions keep the same scale and bridge, but the CT (carved top) version not only moves to a much more Gibson Les Paul-like outline, it also adds a glossed maple top that we'd call contoured - the top itself is flat but its edges are chamfered, a little like a Gibson SG. Two CT versions are offered: with two Seymour Duncan P-90s, as here, or a Godin/Seymour Duncan humbucker setup.

The body outline certainly isn't a draw- around clone of a Les Paul. The geometry of that cutaway, for example, is noticeably different, and Spanish cedar (favoured for classical guitar necks, most commonly) replaces mahogany for the body wood. Godin boasts that the three-piece body is "incredibly light weight, resonant and chambered", and by tapping the body we'd surmise that it's hollowed behind the bridge and on most of the bass side leaving a pretty solid treble side and, of course, centre area to which the bridge, neck and pickups are secured.

At 3.36kg (7.4lb), it's light, but not incredibly so. Depth is a pretty standard 44mm at the edge, with the maple cap adding to the overall body thickness of 49mm - trimmer than a Les Paul.

While the black-faced headstock, a very unfussy classic three-a-side design, is cream bound (like the body), the rosewood fingerboard's edges are au natural, the edges subtly rounded, and the fretting, from a not-over-big medium wire, is precise and tidy on the 300mm (12-inch) radius'd face that just has simple pearloid dot markers with smaller cream plastic side dots. The profile suits the 'classic' vibe of the guitar: a simple quite deep oval (21.5mm deep at the 1st fret, 23.4mm at the 12th) with a 43.23mm width at the nut and modern 52.5mm spacing at the bridge.

Both nut (Tusq) and the ResoMax bridge are made by Graph Tech, the latter a really smart nickel-plated design made from a "lightweight, high strength alloy that boosts harmonic content", and it magnetically locks to the posts so it won't drop off during a full string change. At the other end, the Godin logo'd tuners are more generic, although the case housings are a proprietary design with, again, some classic retro thought. All very classy indeed.

With a good weight, seated or strapped-on, it feels just right, like the neck, or the shoulder-placed toggle. The first difference is the control knobs, which are laid out in a more upright diamond to Gibson's classic placement. It's still easy enough to adjust both volumes with one move of your right hand, though. The Duncan soapbars are different designs, too: an Alnico V Vintage SP90-1 at neck, and hotter ceramic-loaded Classic SP90-3 at the bridge (although Seymour Duncan calls this the Custom).

P-90s have been used in virtually all genres from jazz to pretty gained classic rock, and this single-cut seems happiest in the latter camp, so a slightly crunchy amp seems a good place to start. There's quite
a honky nose to the bridge pickup at the expense of some sparkly highs that you'd expect to hear on some lower-powered P-90s, and as a consequence both volume and tone controls are best left full up;
a slight reduction of either rounds off the highs a little too swiftly.

The neck adds some soul flavour, and cleaning up the amp tone reveals a nice character along with the more Tele-like wide, funkier edge with both pickups on. The chambered construction, not to mention the wood choice, hints ata little semi-like woodiness, but it's more apparent in the welcome resonance and overall character.

Hum can be a problem on the solo pickups (with both on they're hum- cancelling), and we'd be tempted to add some treble bleed caps to keep the highsas the volume controls are reduced.