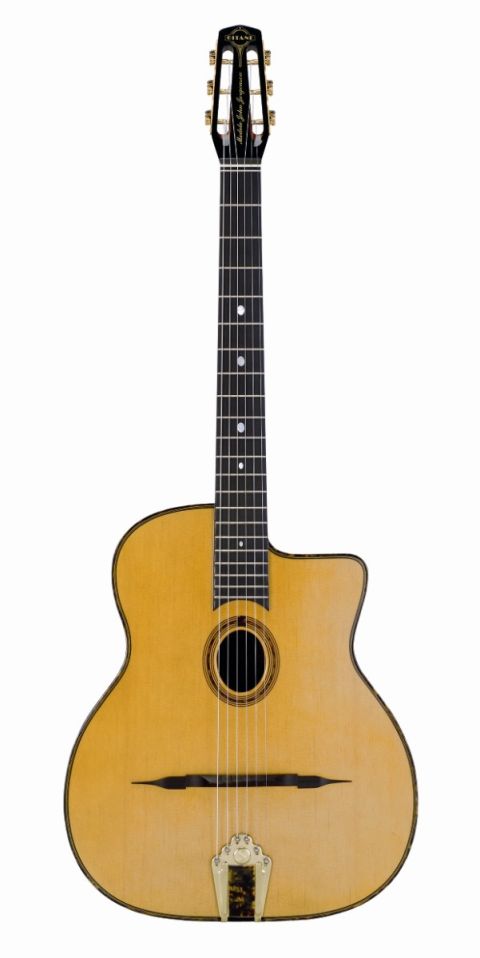 Ideal for a gypsy jazzer on a restricted budget.

Gypsy jazz… manouche… hot club… whatever you call the scene, its origins lie in the unique playing style of jazz legend Django Reinhardt.

We can't help you play as well as Django, but we can help you find a Django-style guitar - an instrument based on the distinctive Selmer/Maccaferri acoustics of the 1930s.

Realistically, a rare vintage Selmer is not an option, so finding an independent luthier that specialises in 'gypsy jazz' models is one solution.

However, if you simply haven't got over a grand (minimum) to spend, or you're fairly new to this musical genre, then read on.

Saga Musical Instruments in the US (home of the impressive Blueridge and Regal brands) has been importing Selmer/Maccaferri reproductions from the Far East since the late 1970s.

A few years back Saga set up the Chinese-built Gitane brand to specifically market its Django-style range.

This line encompasses very authentic copies of various incarnations of the Selmer Modele Jazz, like the D-500.

With his gypsy jazz hat on, all-round virtuoso Jorgenson was already a Gitane user, and his collaboration has resulted in a guitar based on the later Selmer Modele Jazz. It's slightly customised, but is otherwise equally authentic.

While there are several blatant differences here, we'll point out some less obvious key features of this model.

In fact, nearly all this soundbox's struts are taller and thinner than the D-500's. This variance arises because the DG-300 emulates Selmer's revised Modele Jazz construction, rather than Maccaferri's original construction.

Swapping to a 14-fret neck and an extra long scale usually warrants a fair bit of structural redesign. The internal surfaces have a much lighter, non-gloss ?nish, too.

Outside we find reassuringly consistent and clean workmanship again. It's subtle, but the top's toner is a lighter, more yellow shade here.

Special Jorgenson features include the 'Dalmation' pattern tortoiseshell used for the body binding, tailpiece insert and within the rosette.

Also, there's the lush-looking Brazilian rosewood laminate back/sides, but the custom oval fingerboard markers would look better if they were exactly vertical. We find different tuners too - more like classical guitar tuners and consistently less stiff than the 500's.

Several factors combine to give quite a different feel to this model. For starters, the neck's narrower, and its flat-spined 'U'-profile is a fraction shallower.

The especially long scale may prove a little disconcerting at first, but the accordingly increased string tension isn't really an issue with these lighter gauges.

Obviously you've got much more workable access to the upper frets on this model, although the floating bridge needed moving upwards a fair bit to improve the 12th fret intonation, and so was no longer perfectly aligned with its fixed 'moustache' ends. Also, the frets feel rougher for string bends on this one.

Tone-wise, the DG-300 does literally sound tighter than the more conventional Maccaferri-style guitars like the D-500, especially on the low notes.

Where the D-500's bass is pretty soft, this guitar delivers a more energetic and defined bottom end.

By the same token its mid-range is not as warm and the treble is harder and spikier; and while the overall sound seems a little more balanced for standard strumming it's not as satisfyingly 'chug-a-long' for hot club swinging rhythms.

However, you can hit it quite a lot harder before it 'bottoms out', and we can see why this might be the ideal choice for the wannabe Django rather than the Joseph Reinhardt of the quintet.