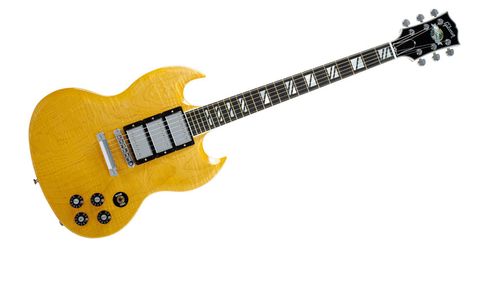 This is a thoroughly capable modern hybrid guitar with the ultimate classic credentials.

Gibson has offered all kinds of SG variants over the years, so we shouldn't be surprised to receive a new version that appears very un-SG-like at first glance. The Supra is modern-minded, from basic material choices to the piezo-loaded Fishman Powerbridge.

An SG body seems extremely thin to Les Paul or Tele players; these measure just 34mm at the fattest point. The Supra is all maple below its natural nitrocellulose finish - around 16mm of flamed maple cap atop a two-piece 18mm maple back.

The Supra has a chunky mahogany neck, which might account for its thick tone, although there are other things to consider. One of which is the fingerboard material, which is ebony look-alike Richlite. We've liked the look and feel of Richlite on Gibson and Martin guitars of late, and we do so again here.

With 24 medium jumbo frets and the SG's already extended neck position, upper-neck access is a breeze. Your fretting hand ends up a long way 'left' of where a Strat or Les Paul would be, but you adapt to it, just as you do the SG's customary neck 'whip'.

There's not a great deal of body or heel mass where neck joins body, so it's easy to bend the necks while playing. That's either a wonderful opportunity or an annoying hindrance depending on your point of view; we tend to treat SG necks like a subtle vibrato arm and constantly be shimmering notes and chords as they sustain.

Gibson's finishing and quality control has been the subject of much debate over the years. There's very little to criticise here other than aesthetic annoyances such as pickup ring heights not being aligned, control cavity plates not precise with their recesses and some untidy wiring.

Binding is rarely 100 per cent perfect. Do you care? It's a contentious question, but this reviewer really doesn't.

The guitar has been factory Plek'd (a machine that does a pretty decent job of the frets, with the guitar under the right tension). Whether it's solely the work of the machine or some added human attention, it plays very nicely - exactly as you'd hope at this price.

Played clean, it has that urgent, forthright delivery that has less width than a Les Paul and more punch than a Tele. There's a fairly thick sound, albeit with perhaps a slightly subdued midrange, but it certainly has an extra complexity compared with our reference all-mahogany SG Standard.

Light yet fat overdrive gives you an edgy blues delight, while a squarer clip brings brilliant classic rock crunch that, of course, screams AC/DC. Heavier gain is no problem: from rich, Southern rock and Texas blues right up to metal levels, the wax-potted '57 Classics seem like good all-rounders. If you dare venture a little Derek Trucks-type bottleneck, you get a hint of that eminently vocal midrange that makes the SG such a fantastic platform - sonically and practically - for slide.

The neck pickup feels overpowered compared with its bridge counterpart - we suspect all the pickups are wound the same, where the neck would be better balanced if it had a few less turns on the coils.

Bringing in the middle pickup, there's no Jimi-style out-of-phase honk, which is a shame, and you can't use the middle pickup on its own. Dialled in partially or fully, however, it does add some colour and width to any of the settings. Truth be told, we'd be happy with just two pickups, or better still, a phase option on the middle.

With the Supra's Fishman Powerbridge split out to a dedicated acoustic amp (we used an AER Alpha 3) and played with a thin pick, it's a good impression of a DI electro-acoustic tone. The low action and nickel strings aren't ideal for acoustic sounds or styles, but if you work to its strengths the resultant tones are usable in a live setting, should you have a handful of acoustic tones to cover.

There's also great potential in mixing these sounds with your electric tones, which could be as applicable in traditional jazz as much as the most progressive rock and pop.

The SG Supra is a versatile, modern instrument. Offering piezo sounds on top of the usual humbuckers isn't just useful for 'faking' acoustic tones, it's also an effective way of mixing in different tonalities and responses for players looking for something extra.

It's not a mass-appeal guitar visually, functionally or in terms of price, but if you're looking for a modern, hybrid 'super guitar' without the overtly modern aesthetic, this is it.