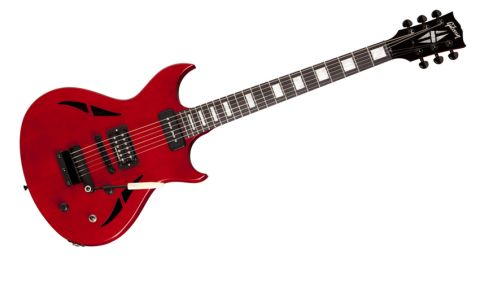 The N-225 captures some classic Gibson design elements, and actually, we quite like the looks - even if, like the tones, they won't please everyone.

We know what you're thinking: what the hell is this? Well, 'this' is the Gibson N-225: a mongrel that borrows elements from Gibson classics such as the SG, LP double-cut and ES series.

It joins Gibson's product line-up as part of the Designer series - home to other radical designs including the Moderne and Flying V. As such, it'll divide opinion faster than the proverbial yeast-based toast accompaniment.

The mash-up of styles doesn't stop with the visuals. The N-225 is loaded with a P-90 in the neck position and a Dirty Fingers humbucker in the bridge. Controlled by a standard three-position toggle switch, the humbucker can be split using the tone pot for single-coil sounds.

You also get a Vibrola vibrato, as seen on signature SGs by artists such as Frank Zappa, Angus Young and Robby Krieger. And don't let those f-holes on the N-225's maple body fool you - this is an "open- chambered" design rather than a full-blown semi or hollowbody.

As the pickup configuration implies, the N-225 offers pretty diverse tones. The P-90 in the neck sounds great clean, but better when you apply a little dirt for punky rhythm sounds, and it also gets you deep, defined and tonally rich neck pickup tones for single-note riffing.

It's a similar story with the Dirty Fingers in the bridge, albeit with more bite. It works particularly well for heavier sounds, without muddying up as much as the P-90. Given the scale length, you'll find that some of the traditional single-coil snap is lost from the coil-split unless you really dig in, but once you do, you'll find it surprisingly authentic.

Overall, there's a real sense of clarity from the N-225: the pickups sound powerful yet dynamic, and the individual notes are audible, even under plenty of gain. In addition, the chambered body and f-holes help to create resonant feedback when needed.

Yet we can't figure out who this guitar is for. It's too modern for retro-obsessed gear hipsters, too solid for rockabilly freaks, not solid enough for out-and-out metal. The N-225 is a bit of a jack-of-all-trades, accomplishing some great tones very well, but without mastering any.

It left us with a slightly indifferent impression overall. And when you're only getting a quid back from £1,000, that's not enough.

Still, we can sympathise with Gibson's designers. Pump out another Les Paul and you're accused of complacency, deviate from the script and it's not traditional enough…