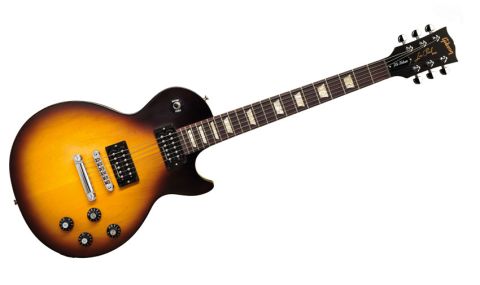 A bit rough and ready it may be, but for more aggressive rock players this has 'gig me hard' written all over it.

Gibson has termed 2013 The Year Of The Les Paul, and numerous models have already been announced, such as a series of pretty affordable Tributes, subtly different from the previous Studio Tributes, including real rosewood fingerboards. We take a look at the new for 2013 Les Paul '70s Tribute...

Many USA companies prefer to keep their main brands USA-made, or at least a little south of the border, rather than employ a factory in Asia to replicate their designs for less money. Fender, Taylor and Martin all have their Mexican factories. Gibson, however, refuses to cross that border and instead continues to offer more and more affordable Nashville-made instruments.

In the USA, as in Europe, the biggest cost in a guitar's construction is the labour involved. So, if Gibson aims to meet a USA-made price point of say, £700, it's got to cut a lot of corners - and as we've often reported, the overall playing experience can suffer as a result.

At the edge of the guitar, the Les Paul measures 45.6mm and overall depth is approximately 55mm. The Les Paul's top-carve is noticeably contoured and violin-like. Then there's the all-important mahogany/maple ratio to consider: the mahogany back is 39mm thick, leaving a 16mm thickness of maple.

Thickness aside, the appearance of the maple top obviously contributes to the look of the instrument. The plain maple sunburst top has unbound natural maple edge and a matt nitrocellulose finish, which typically is off- the-gun - it isn't cut back and then buffed - and as a result, has subtle 'orange peel' indentations. The result is that this Les Paul looks matured - that matt sheen will buff up with playing, and the finish will age quickly.

The guitar's back is centre-joined, two piece - very tidily jointed, too - and there's little edge radius to either the front or back edges. Finally, the back remains uncontoured, as always.

The neck joins the body at the 16th fret and the neck tenon (not full width) all happens under the fingerboard. The neck pitch is steep, as is the headstock back angle, with its classic 17-degree pitch. It also has a volute under the truss rod access point, too - in theory, to provide more wood in this notorious weak spot, which is enhanced by those steeper back-angles.

The medium '70s profile of the neck is comfortable wide and we have a fingerboard radius of 305mm, meaning the Les Paul's full shoulder gives a clubby feel, while the fingerboard edges feel square and the ends of the frets are just slightly sharp to the touch. The nut is nicely shaped with shallow string grooves.

The neck does feel a little unfinished, and those sharp fret-ends add to a slightly cheap feel. But plug in, and all those things fade away. It's like we've added an additional gain stage: the high-output ceramic-loaded Dirty Fingers humbuckers (originally introduced in the late 70s) certainly add some squash and gain, but the tonal quality is excellent.

It kind of does that hot-rod Les Paul tone and not much else, but use the volumes, which really sound good with both knocked back, and it's far from a one- tone pony. The neck pickup is again full, dark-toned and plummy. If high-output ceramic pickups suggest aggression and edge at the expense of tone quality and dynamics, that's not just what we're hearing here.

The guitar isn't overly impressive in terms of tuning stability - the nut creaks a little, and the tuners feel a little soft, too. But as the instrument settles down during our play tests, it becomes more acceptable.

The '70s Tribute has that very familiar four-control setup that many find hard to improve on. The rather cheap-looking knobs with their ribbed shafts are an excellent onstage choice for those of us who suffer from sweaty hands - the tone-control tapers are smooth, too.

It's not just the name on the headstock (though that'll be a major draw for many), this guitar has a 'blue collar' feel and appearance and after a few gigs, it will certainly look pretty road- worn. It's not entirely tidily built, either, but for garage-rock and aggressive styles, the supposedly 'inferior' ceramic- loaded high-output 'buckers certainly cut the mustard.