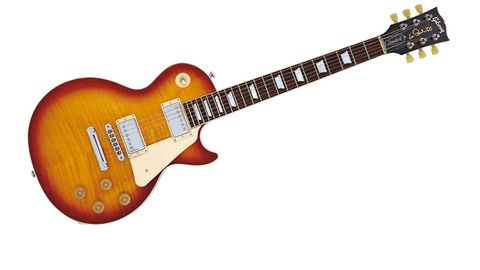 It's expensive, but if you can get on with the 2015 spec there's a depth of tone that's a cut above its siblings.

For 2015, Gibson's annual makeover of the Les Paul Standard is more radical than ever. We take a close look at the latest iteration of the firm's flagship solid body model...

The new line-up of Gibson's USA production guitars is full of change. Are you ready? First off, the Tronical-designed Min-ETune 'robot' tuning system has been rebranded as the G Force Tuning System and is standard - not optional - on all the guitars, with the exception of the Derek Trucks SG and Firebird.

All the models have proper gloss nitro finishes and come in a new-design TKL moulded case; plus a Les Paul 100th birthday signature on the headstock; an 'improved contact' output jack and "more robust cables" for a "stronger signal strength".

On top of that there's an upgraded Tune-O-Matic bridge with titanium saddles, a slot-in/pull-out removable pickguard... Oh yeah, and a totally overhauled neck profile and weight-relieved body.

As the definitive Les Paul, the Standard has gone through some changes over the years, not least recently!

Under the hood is the modern weight relief and centre-joined 'ultra low' density mahogany back - it's still no lightweight, though. The neck profile is the 'slim' profile but asymmetric, putting more beef on the bass side (20.8mm at the 1st fret, 22.5mm at the 12th). The fingerboard is classed as 'dark' and there's purple streaks to the grain.

A neat addition is the easily removable no-screw pickguard, which via three small prongs slots into the cream pickup rings, leaving no open screw holes as the standard fixings do when you remove it.

As you'd expect, there's the classic four-control layout with dual Burstbucker Pro humbuckers, with their slightly unmatched coils - a difference of about 200 turns - and Alnico V magnets.

We have tuned coil-taps via the volume controls' pull/push switches, but we also have pull/ push switches on the two tone controls - pulling up the bridge pickup's tone sends that pickup straight to the output jack, bypassing the tone and any interaction of the other controls; the neck pickup's tone, with the switch pulled up and both pickups selected, puts them out of phase.

Overall, the gloss finishing is really good: typically Gibson in that it's not mirror-perfect, but it's clearly thin, crisply coloured and also pleasantly non-sticking on the neck backs.

The Standard is a seriously classy performer, though, that feels rich and sophisticated in every position.

Played clean, even the full humbucking tones have a three-dimensional, bell-like complexity that may redefine your expectations of how much clean mileage you can get from a Les Paul Standard. The single-coil voicings are, likewise, a more expressive step up from those of the Studio and Deluxe.

Additional sauce here comes courtesy of the 'straight out' setting, providing a little more raunch, and you get a honky, out-of-phase tone that's useful should you need a T-Bone Walker or pseudo-Varitone-type lead voice to slice through a mix in the studio.

Back in full humbucking mode, crank up your amp or add a nice overdrive pedal and the Burstbucker Pro pickups excel for the kind of classic lead tones that the likes of Clapton, Page, Kossoff and many more used to define the vocabulary of rock.

The Les Paul Standard may be priced dangerously close to a used R8 or R9, but in the heat of battle with a hot, loud amp you'd struggle to get a cigarette paper between the tones on offer here and their Gibson Custom equivalents. Not for the first time, we encounter a crop of new Gibsons (having already reviewed the 2015 Deluxe and Studio), in which the Les Paul Standard sets the standard when it comes to sonic quality.

There's plenty here to alarm the purists - not least that if you want to buy a new Les Paul Standard that doesn't have a brass zero fret, board-mounted components, G Force tuners and non-traditional fingerboard dimensions then you'll have to shell out at least £3,199 for the 'entry-level' Gibson Custom Plaintop R8.

However, our recent conversations with Gibson indicate that the company's 2015 USA model simply isn't aimed at the same players who lust after vintage accuracy - onboard self tuning, more beginner-friendly fretboard dimensions and the like are symptomatic of a conscious decision to appeal to a new generation of guitarists.

Less controversial are improvements in the fit and finish, but it remains to be seen whether the people Gibson is targeting have the funds to splash out on the Standard. The Standard is a real 'heart purchase', but we'd suggest that it's priced in a ballpark that's accessible only to older, well-heeled beginners, rather than the next generation of guitar heroes.