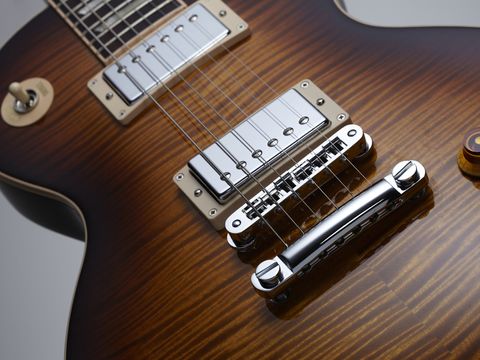 Looks like a classic 'Paul but has numerous good-sounding additional tones. A very well-made guitar indeed.

There's little doubt that this 2012 Standard is a very good-looking Les Paul, and it's been set up nicely too.

The slightly upward-pointing flames of the AAA-grade maple top are strong, though it's slip-matched rather than perfectly book-matched. The centre joint too isn't the cleanest we've seen, but the dark 'bursting of the top and dark brown of the sides, back and neck are well done.

"Nicely balanced both in terms of relative output and string-to-string response, there's plenty of vintage-style, low-output clarity from the humbuckers"

Yes, it's not the mirror 'dipped in glass' finish seen on certain other high-ticket USA brands - this is nitrocellulose and there's noticeable 'orange peel' on the back. The edge binding too, around the top of the body, doesn't have the sometimes very noticeable ledge where during the finish process the binding is scraped of any colour - it's a pretty clean job.

The fingerboard is very smart, from those crisply inlaid trapezoid inlays to the perfectly cut nut and the tidy fretting. As usual, the fret ends don't sit over the too-thick binding - the end of each fret is actually the raised nib of the plastic binding, which does limit the playable width of the fret - but that's Gibson's way.

Lurking within this impressive presentation are the numerous tweaks that create this year's Standard specification. There's the 'modern' weight relief - the latest attempt by Gibson to reduce the weight of the mahogany back and also impart some additional resonance. It's not over-heavy, but certainly not light.

Second, the fingerboard has a compound 10- to 16-inch radius instead of the classic 12-inch camber of most Gibsons. Like the previous 2008 Standard, the neck profile is asymmetric and classed as a '60s SlimTaper.

The shoulder is slightly more square on the bass side, more relaxed on the treble with a centre depth of 20.6mm at the first fret and 22.45mm at the 12th. It's a very good mainstream neck shape.

This LP doesn't advertise the 'deep-set neck tenon' of the 2008 Standard, but we do have the steeply back-angled (17°) headstock. Other features that differentiate this model are the TonePros locking tune-o-matic and stud tailpiece, and the very smooth-actioned Grover rear-locking tuners with their metal kidney-bean buttons - not necessary on a non-vibrato guitar, but they do speed up string changing.

It's the Les Paul's electronics that are the main departure. Each of the four control knobs hides a dual function accessed via pull/push switches.

Both the 500k-ohm volume controls have a 'coil-split' switch - anecdotally referred to as a 'Fat Tap' when we spoke to Gibson designer Jim DeCola earlier.

A standard coil-split dumps one of the humbucker's two coils to ground. Here, however, we have a 'partial tap' where some of the 'dumped' coil is retained for a fatter sound and a little hum cancellation.

"This design also provides for a more balanced output between the single-coil and humbucking tones," says Gibson. "In single-coil mode, the pickups are reverse wound/reverse polarity which offers hum cancelling when both pickups are active."

The neck pickup tone control also offers an out-of-phase option with both pickups on. If just the neck pickup, in single-coil mode, is selected, engaging this mode will voice primarily the outer single-coil; with the tone switch down, it's the inner coil.

Nicely balanced both in terms of relative output and string-to-string response, there's plenty of vintage-style, low-output clarity from the humbuckers; played clean, you might think they're almost too bright for that 'classic' Les Paul tonality. There's immense presence and sustain to the sound, which really equates to 'good Les Paul tone' to our ears.

The single-coil modes are more surprising. Individually, you will hear some hum pick up but the tone, which is definitely stringier and slightly lower in output, sounds a little choked in the high end, as though you've just stepped on a slightly backed-off wah pedal.

The pure bypass mode restores some of the highs but it's bridge pickup only - some might feel it's a little too bright.

Played clean, the out-of-phase tone is quite challenging, but don't forget with both pickups on you can select either of the two pickups' modes - and that alone, combined with the tone controls and different amps tones, provides quite a palette of sounds. For example, with both pickups selected in out-of-phase mode, and a more gained amp tone, the clean-amp thinness translates to a nastier, aggressive, very grungy sound.

For many, crunchy gained sounds are the Les Paul's sweet spot. The single voices here sound a little P-90-ish - even a little mini-humbucker-ish - and while there's not a huge volume lift when you go back to humbucker mode, there's certainly more high-end, almost as if these single-coil tones are less Fullerton, more Seattle circa 1991.

OK, the pull/push switches aren't the easiest to quickly engage but as the knobs, even depressed, sit a little way off the top they're easier to grab than you'd think. And it's worth it.

From clean, bright-edged vintage-y tones through to classic '70s and '80s not to mention those grungy out-of-phase gnarly voices, there's much to enjoy.

The Les Paul is really two guitars in one: a killer classic- sounding vintage-informed modern 'Paul but with, if you need them, expanded sounds including very usable, P-90-ish single-coil voices. Clearly, all those years on from the LP's inception, Gibson is still in a good place.