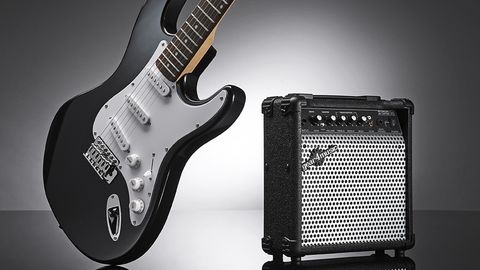 Including a reasonable guitar and a truly excellent amp, as well as all the accessories, this is a perfect place to begin a serious love affair with the electric guitar, a relationship that, if you're lucky, will last a lifetime.

Picture the scene. You son has just seen, say, James Hetfield riffing out on YouTube for the first time and, as he should, expresses a desire to be 'like him'. You offer a silent prayer of thanks to the Gods of Rock and agree to buy him his first guitar, which will probably be a classical of some sort simply to ensure that your offspring's fingers remain unbloodied by the more forgiving nylon strings while he learns his way around the instrument.

But, as Hetfield's ESP Explorer is still fresh in his mind, he wants an electric guitar, an amp and all the trimmings, too. You consider your barren wallet and wonder how you can help.

Well, a complete electric guitar pack is certainly an answer, a single purchase that includes everything little Johnny will need to make a raucous racket while thoroughly enjoying himself in the process.

This Gear4Music pack includes a full-size guitar and a bijou 15-watt combo, plus a strap, lead and set of strings. The guitar, loosely based on the classic spec of a Fender Stratocaster, is loaded with three single coil pickups that are controlled via a single volume pot alongside a pair of tone pots.

The whammy bar, again loosely based on Fender's design, comes set flush to the body and we'd suggest leaving it that way; dive-bombing leads to all sorts of tuning issues…

The guitar is a little unbalanced when strapped on as the one-piece maple neck is significantly heavier than the body, which is fashioned from paulownia wood, a tree common to much of China and South East Asia. That said, the guitar has been finished nicely and additions such as two string trees and a competently-cut plastic nut are impressive.

The amp is even worthier of note, especially when considering the price point. Loaded with a single 6.5-inch speaker, what it loses in sonic quality it more than makes up for in the portability stakes. Measuring less than four inches in width, it's eminently portable and, as the guitar also comes with a soft case, tramping off to school for a music lesson or to a friend's house for a jam will cause no problems.

With a switchable boost function that significantly ups the gain, the amp can get very dirty indeed, a tone that can be controlled with the volume pot. The single coils, plus the small speaker and reduced cubic volume of the cabinet, lead to a rather thin and scratchy tone, but it's certainly a satisfying experience to blast away with.

In clean mode, the guitar's inbetween settings, positions two and four on the selector, are authentic and adding a touch of chorus effect polishes the sound still further. Best of all is the amp's cool rear-mounted tilt-back panel, which allows you to point it towards you whilst sitting down. Genius.

Neighbours and family members alike can remain undisturbed by jam sessions as there's a headphone socket on the amp and, for heightening jollity, there are stereo inputs for a CD player. To use the latter, you'll need an additional purchase of a set of phono leads (they're not expensive). To use with an iPod or other MP3 player, simply connect your unit's headphone output to the amp with a set of these leads.

Again, the tone isn't especially brilliant but, for learning songs or simply having fun playing along with your favourite songs, the quality is more than acceptable.

All sorts of deals are available online for this pack, but even at the full RRP of £150, its value is assured.