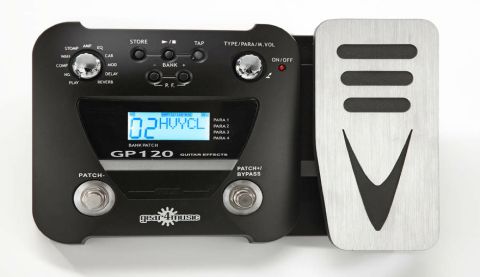 A curate's egg of a pedal, but the good definitely outweighs the bad.

Multi-effects units are traditionally associated with beginner guitarists making their first forays into the world of the pedal dance. And there's no shame in that: they're a great way to figure out which effects work with your playing style, and for inspiring new songs and sounds.

Gear4Music's GP120 is one such unit, and considering its twin-footswitch'd, expression pedal-equipped spec, looks like it could have everything it needs to be one of the best effect-laden bargains on the market.

Having these individual modules means you can combine multiple sounds into one patch, which can then be stored as one of the GP-120's 48 user presets. Setting up presets can be fiddly thanks to the single parameter control knob, but the LCD screen is dazzling - there's no danger of missing this stomper onstage.

Straight out of the box, the GP-120's factory presets seem to be designed to showcase the unit's most extreme sounds, so we'd advise setting up your own tones from scratch, which will not only keep the sound useable but also teach you a thing or two about crafting tones.

Starting with the dirt, the stompbox models are reassuringly accurate, if a little noisy - but that's what the noise gate is for, right? The DS-1 model faithfully recreates that unit's trademark tight distortion, while the Fuzz Face, Rat and Tube Screamer models also provide more than usable tones.

There's a wealth of modulation options at your disposal, too, and the chorus, tremolo, flanger and vibrato capture those effects admirably, while the delays and reverbs are more than capable of fulfilling your echo-based fantasies.

However, despite an expression pedal that's satisfying to use, the wah models are a little synthy, and the pitch shifter's tracking seems off more often than not.

But the octaver effect makes up for that: its polyphonic tracking covers upper and lower octaves simultaneously, and makes for a great organ-emulating tool, although it does sometimes struggle to keep up with speedy scale runs.

Most interesting, however, are the intriguingly titled Chop Slice and Auto Riff. The former is a rhythmic tremolo that slices your tone up into preset patterns, while the latter is an arpeggiator that automatically plays scale notes based on the note you're playing - very cool.

The built-in drum machine is a lot of fun, too, covering everything from thrash to fusion, and sure to inspire a few riffs along the way. Amp models cover the main varieties, but the more distorted models do leave a little to be desired. In fact, if you want to hear the roar of a JCM800 running at full tilt, you'd be best off setting that model's gain to zero and running a stomper for your distortion. Of course, this isn't a problem if you're already using an amp, but it means DI'd sounds aren't as usable as they could be.

Like their chocolate counterparts, multi-effects boxes are often a mixed bag, and the GP120 is no exception, with pleasant Maltesers surprises and the odd unwelcome Bounty disappointments.

Every all-in-one unit has its strengths and weaknesses, so it's worth weighing up exactly what you're looking for before buying, but the GP120 certainly has some unique, if not always practical, tricks up its effect-embroidered sleeve.