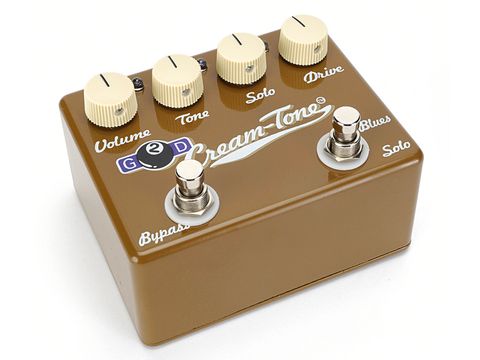 The Cream-Tone might not have quite as much top-end presence when A/B'd with an original Tube Screamer but it certainly has its own charm.

G2D's Cream-Tone overdrive unashamedly draws its inspiration from the fabled Texas sound. Guitar tones you would relate to the bell-like overdrive of Stevie Ray: a Stratocaster with a screaming TS808. But this is no Tube Screamer clone.

Hailing from New Zealand, the hand-made Cream-Tone oozes vintage vibe both in its high-quality components - some of which are sourced from the UK - and in its brown and cream aluminium casing labelled with aged sixties Fender-style logo.

Its four vintage-knobbed, highly interactive controls consist of volume (which sets the level between the amp's clean tone and the pedal's sound), tone (which dials in more or less low-end), solo (which adjusts solo-boost and adds warmth) and finally drive, (which controls overdrive).

It's all switched in and out with twin footswitches (bypass and solo or blues mode) and their corresponding LED indicators.

G2D's ingenious dipswitch design dishes up four further EQ options, a mixture of more or less drive and bass allowing Fender and Gibson players the opportunity to adjust the response and flavour according to the music and pickup style - nice.

Switch the solo mode in with the dipswitches set at more bass/less drive and big-bend Stevie-style solos are a must.

A great thing with this pedal is if you max out the solo and drive controls you can get insane Hendrix solo tones while maintaining note definition and guitar transparency.

Using an ES-335 the dip switches work wonders and, with a bit of jiggery pokery, you're able to create subtle Robben Ford-like Gibson tones and, with everything flat out, it's hello Billy G.