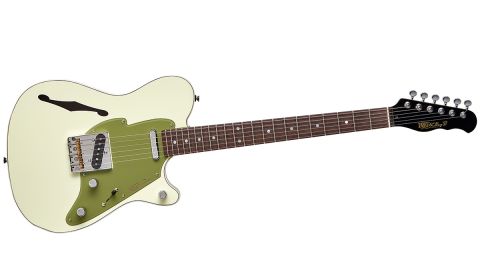 This guitar is the very essence of Fret-King and one, if not the best, we've played to date.

Criminally overlooked by the fashionistas, Fret-King makes a pretty wide section of classically informed electrics, all with tweaks aplenty by one of the industry's longest serving tweakaholics, Trev Wilkinson.

To be honest, we're surprised he hasn't yet had a knighthood for his services to the electric guitar. Along with the bread 'n' butter Black Label 'standard' models (although there's very little standard about Wilkinson's mash-up mania), there are some 14 signature models from a pretty diverse range of players including Geoff Whitehorn, folk/country mangler Jerry Donahue, the eclectic Gordon Giltrap, and one of the UK's finest jazzers, John Etheridge.

Joining this diverse team for 2016 is probably the best-known of the bunch, John Jorgenson, whose career has included The Hellecasters, numerous stints and collaborations with artists such as Elton John, Bonnie Raitt, Sting, Bob Dylan and even Luciano Pavarotti, as well as keeping the flame of Gypsy jazz alive with his eponymous quintet. Annoyingly, he's also a dab hand on the saxophone, clarinet, bouzouki, pedal steel and mandolin.

With those diverse and well-honed musical chops under his belt, it can't have been that easy to decide exactly what sort of guitar he wanted. "I've known John for many years," Trev Wilkinson tells us. "Jerry Donahue is already one of our artists, John is Hellecaster number two - I'll have to give Will Ray a call," he laughs.

Knowing that John would be in the UK during 2015, Trev set about creating a guitar that might interest him. His initial attempt involved crossing his Country Squire Semitone with the aesthetic of Gretsch's two-tone green Anniversary, including a painted-on f-hole for good measure - and it had John hooked.

Now, the Country Squire Semitone is a close-ish semi-solid clone of the Telecaster, albeit with a range of different pickup layouts, bridges and vibratos, not to mention a typically tweaked outline, headstock and scratchplate geometry.

So, while that model from Trev's catalogue might have been the basis - along with its Fender Custom recipe of bound alder body, bolt-on maple neck and rosewood fingerboard - the treble horn of the 'JJ' is reduced, the line of the cutaway flowing into the less-square upper shoulder rather nicely (Trev's collection of French curves is legendary!).

The body is routed from the front, leaving a centre section and little else, then topped with a thin piece of alder, any jointing hidden by the binding.

With a standard pickup configuration it would have been quite a guitar, but the 'JJ' has a few tricks up its sleeve in the form of two 'ghost' or dummy coils under the scratchplate that provide hum-cancelling but still retain a true single-coil sound - that was John's request, because he still wanted the standard single-coil tonality. You switch between the two via a push-push switch on the tone control.

Secondly, we have Trev's 'Vari-coil' control, placed like a master volume on the tip of the lower horn. Typically, this moves from single coil to dual coil, for example, on a humbucker. Here, it only works on the bridge pickup, which is a single coil. Trev?

"It's a WVOBT [Wilkinson Original Broadcaster Tapped], so as well as its Broadcaster-esque spec, there's additional wire, like a secondary coil, in the centre of the pickup that brings in an additional 3kohms of winds for a boost, as John says, when he needs to 'take it over the top'."

Here's a lightweight beauty that feels 'right' from the off. The frets are a little bigger than you might expect, the radius more Gibson-like and hugely bend-friendly, with a deep-ish handful of C-section neck that feels 'manly' without being over-big.

Intonation is tamed by machined ledges on each saddle (despite having three brass saddles), all housed in a high-wall Tele-style tray bridge. There's a lovely unplugged ring and resonance, too; plugged in, this means there's plenty going on.

Its Tele-like sonic repertoire has a little extra 'cloudy' semi response, a little extra thickness, perhaps, but still with plenty of Tele-like 'steel' from the bridge, a little added depth to the percussive twin-pickup mix, and a smooth rounded voice, as you'd expect, from the neck.

Push up the tone control and you naturally expect to hear a different sound - but you really don't. Push it back down, however, and generate some close-to-your-amp hum, then push it back up again and the hum is certainly reduced - not as dead quiet as the pickup mix, which is also hum-cancelling, but certainly enough to clean up some of the single coils' notorious hum pick-up.

The 'master volume'- placed Vari-coil is again subtle, adding some lower-mid thickness as you turn it up. It only works on the bridge pickup, but with it full on, a little volume reduction to tame the high-end sizzle and a little tone reduction with perhaps some added gain boost, it's a noticeably thicker voice, with a hint of ES-335.

It's easy to encourage some musical feedback on gainier, higher volume sounds, and as our test time continues, we simply conclude that, although the hum-cancelling effect might be relatively subtle, the combination of the chambered body, that Vari-coil and the shading from the volume and tone controls creates one of the finest Tele-styles we've played that doesn't feel or sound like its price would suggest.

The danger of any signature guitar is that it's so specific to the actual artist that its appeal might be very limited to the rest of us. That's the case here, in that the hum-cancelling function, though effective, might be a feature few of us need for our journeyman gigs.

Add in the Vari-coil feature on the bridge pickup and, again, we have a subtle shift - hardly like a 20dB active gain boost. But, no, the 'JJ' - like the player who inspired it - is all about subtly and nuance. Superbly conceived and executed, it's a very serious Tele-inspired option with boutique flavour aplenty but a more-than- mainstream price.