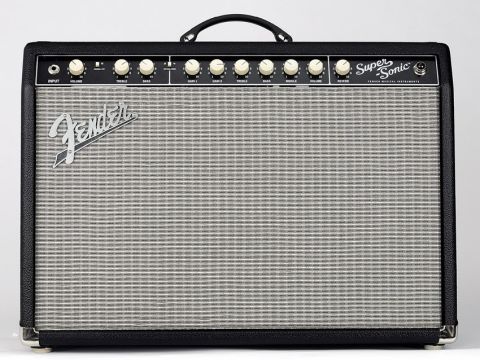 A small gig revelation - fat gain with classic fifties and sixties cleans. In one amp? Yep.

We all know about Fender guitars: the Telecaster is the seminal solid-body electric, while the Stratocaster remains the platform on which every solid-body double-cutaway boltneck guitar begins its life.

What fewer people know, however, is that at the other end of the cable, Fender's early amp schematics continue to breathe life into the world's top boutique brands to this very day. It's not overstating the case to say that Fender amps' role in the bedrock of amplified six-string history is every bit as important as that of its guitars.

"With both channels set to stun, the 22 is always at the mercy of its power section - a good thing it you like the extra squash and elastic playing dynamics."

Fender is as happy as anybody to build on that bedrock, of course, and for 2010 it introduces the updated Super-Sonic series - vintage Fender tone in one channel, high-gain drive in the other - aimed squarely at tone-hungry, pro-minded players.

The 22 is the new addition to the Super-Sonic family. It's a more portable, low-to-medium volume option for anyone who finds the 60-watter's roar a little too much. The power section is based loosely around the now-legendary mid-sixties Deluxe Reverb; two 6V6 output valves for around 22 gig-worthy watts, though there's no valve rectification here.

A single 12-inch Eminence speaker does the shouting, with enough room around it in the high-quality ply cabinet to sound big and airy. Build, fit and finish are typical Fender: efficient, high quality, well-designed and with a clear nod to the brand's heritage.

Unusually for an amp, there are two standard finish options: early sixties-style blonde Tolex and oxblood grille cloth, or the later black Tolex with silver grille - not everyone wants a black amp, right?

The preamp section features two channels. The first, Vintage, is a model of simplicity with just volume, treble and bass, plus a mode switch to go between normal and fat modes. Normal is designed to evoke the sixties Deluxe Reverb, while fat adds a more pronounced mid character.

The second channel, Burn, is where the Super-Sonic moves forward apace. The dual-gain controls are the first clue: Fender bills gain one as adding edgy break-up and distortion, while gain two adds compression, thickness and sustain - pointedly, an area in which Mesa/Boogie for one has excelled.

The post-gain EQ enables you dial-in a wide range of sounds and textures. Reverb just seems right when we're talking sixties-inspired Fender amps, and thus you get a long-tank Accutronics spring reverb in both combos.

There's absolutely tons of it on tap, so much that we had to turn it off completely to stop the inadvertent clangs on a slightly rickety function gig stage. On a more solid foundation, there's very little to beat that wonderfully rich yet bright ambience, be it subtly shimmertastic or completely engulfing.

We would have liked separate controls for the two channels, however. A nice ambient spring in the clean channel easily turns into a much bigger wash with the extra gain of channel two, so compromise is needed.

The Super-Sonic 22 is controlled with a four-button footswitch: three sounds - normal, fat and Burn - plus reverb on/off and the option of switching the series effects loop in and out. There are no level controls for the loop on this model.

One of the main aims of the Super-Sonic update was to get a fatter tone with increased bass response. We'd assume Fender means from the burn channel, because most Fender valve amps have buckets of deep bass in their clean sounds, something that's clearly in evidence here. Depth, twang and airiness - the 22 delivers that in its normal mode.

The 22 is no shrinking violet, however, managing a number of unmic'd gigs with a loud acoustic drummer during its time on test. Think about SRV's Lenny; or about John Mayer's Slow Dancing, Knopfler's Sultans Of Swing - those sounds are here with a Strat, with as much poppy, spacey reverb as you need. Plug in a Tele and it's Bakersfield twang all the way.

Both clean modes will drive nicely much above four, and in that respect, a separate master on this channel would have been a good addition to get that happening at lower volumes.

Moving to the burn channel, the amp starts with a clean-to-medium overdrive that suits rocky chording, then through to more clipped distortion and on to full, sustaining saturated lead tones.

It's useful to think about the first gain control as getting you to the right ballpark then, to this reviewer at least, the second gain control feels like the 'un-Fenderise' knob, in that things get fatter and more harmonically rich, and the bright, edgy air to the notes all but disappears as you crank more on.

Don't be afraid to use wild extremes of the tone pots, either, which help sculpt rock tones from classic seventies-style distortion through to modern, mid-rich screaming leads.

With humbuckers, something approaching Robben Ford's Talk To Your Daughter is in here, and you can even get a passable fat 'n' fruity Eric Johnson lead tone from a Strat. Metal it ain't, but high-gained and vocal it absolutely is.

With both channels set to stun, the 22 is always at the mercy of its power section - a good thing if you like the extra squash and elastic playing dynamics under your fingers. It's not so good if you like it all clear, precise and well defined. Whatever, be in no doubt that this lead channel is a very different beast to what you'd find in Fender's Hot Rod amps.

Plenty of features, a self-explanatory control panel and tons of sounds that span Dick Dale to Derek Trucks, to Robben Ford and beyond. If you think Fender doesn't do great distortion, think again.

The 22 is a mid-power revelation: enough grunt for most pubs and clubs with an elastic dynamic response when you really get it cooking, All in, it's a highly portable package.

The price - depressingly - is competitive alongside other USA-made all-valve amplifiers, albeit less so against Far Eastern-made valve amps. Moreover, is it worth the extra over the ever-popular Hot Rod series?

It depends on your needs - the Super-Sonics are more vintage-sounding in channel one, and undoubtedly more 'tonehound' gained and voiced in channel two. If we were starting from the beginning, that's what we'd be asking for…

Now listen to our audio demo to hear how the Super-Sonic 22 sounds: