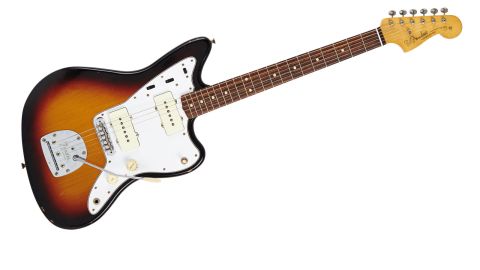 An elegantly put-together offset, complete with wonderful tones, looks and vibe - for an old-school Jazzmaster at a reasonable price, look this way.

Flicking through the Fender catalogue today, it's hard to believe that the company ever discontinued the Jazzmaster. Since that model's popularisation in the early 90s, fuelled by the alt-rock and grunge movement, the guitar has gradually found itself peppered across the majority of Fender lines, making its addition to the Road Worn line is the next logical step.

Whether you think a nitrocellulose finish is integral to the look and feel of a guitar or not, there's no denying that this two offset looks mighty fine. It echoes its USA-made American Vintage counterpart in arguably the key areas.

Aside from the finish, it's also packing the same American Vintage '65 pickups and floating tailpiece - notably sans vibrato lock switch - as well as vintage-style adjustable bridge, where most modern incarnations of the Jazz have made use of Fender's Adjusto-Matic unit.

The Jazz is designed to look like it's already received a few decades of touring, but Fender hasn't gone over the top here - unlike the first Mexican Road Worn relics - there are a few finish chips on the guitar's top and side, but much of the action is going on in less immediately obvious areas, from the faded rear belly cut and gnarled headstock to the worn chrome and plastic knobs. It looks like a guitar that's been lovingly played over a period of time, rather than one that's been subjected to a few random dings and scrapes in a factory.

This more subtle work continues to the Jazz's neck which, again, is beautifully worn with a natural, down-to- the-grain feel that any player could appreciate. There's a fairly generic C-shaped neck, which feels more contemporary than vintage, but produces a comfortable playing experience nonetheless. What's less comfortable from a playing perspective is the vintage-style bridge and floating vibrato assembly.

We noted above that most contemporary Jags and Jazzes have Adjusto-Matics and there's a good reason for that: as players of vintage offsets will attest, the saddles on a traditional Jazz bridge simply don't have deep enough grooves to keep the strings in place.

Hit the low E hard, or bend above the 12th fret, and be prepared for the string to pop over to the A saddle and increase in pitch as it does so - not a pleasant mid-gig experience. Of course, upping the string gauge beyond our review model's'0.010s and even employing flatwounds can help, but not every player wants to make that change.

We understand that faithful spec is the name of the game here, but the bridge assembly proves that vintage authenticity isn't always the best policy.

Of course, the saving grace of Fender's offset oddball has always been its tones, and as you'd expect with the pair of American Vintage single coils filling the cavity, it doesn't slack off in this department. You'll struggle to find purer, more pristine cleans than those you'll wring out of a Jazz, and these pickups make you understand why surf acts became bastions of the guitars in their original lifespan.

The Jazzmaster's control panel features the rarely used rhythm circuit, but with a familiar three-way toggle doing the switching business, tracking down tones is easy. And what tones they are. There's presence and mids to the Jazz in all positions, giving it an almost hi-fi feel.

The mellow neck pickup invites arpeggios and open chords with its top-end chime, which transforms into a more pronounced funk-ready quack with a flick to the middle position. Engaging the bridge pickup results in the most aggressive tone from either guitar, making this a better fit for alt-rockers eager to avoid retrofitting a higher- output pickup.

Then there's the oft-maligned rhythm circuit, which drops the high-end from the equation, leaving only the neck single coil engaged for a woolly tone that most guitarists struggle to effectively employ.

Admittedly, it's hardly suitable for all-purpose playing, but with a cooking valve amp or sufficiently raunchy fuzz it yields a gritty QOTSA-style rhythm honk, again proving these guitars deserving of their alt-rock credentials.

As Jazzmasters go, the Road Worn Jazz is hard to fault: it offers sweet, shimmery tones redolent of the original while delivering looks to match. However, as a modern, road-ready guitar, we can't help but worry about that pesky bridge.

Maybe we've been spoiled by Troy Van Leeuwen's Jazzmaster, which features the string-pop-combatting Mustang bridge as standard, but part of us wishes Fender would concede to the everyday player, especially with an instrument like this, which is aimed at those who can't quite stretch to American Vintage or Custom Shop models.

Nevertheless, the wealth of tones on offer make it a superb recording instruments, if not an onstage mainstay. For offset newcomers, we'd recommend you start with something a little more user-friendly, but for connoisseurs who don't mind a bit of playability unpredictability, or are handy with DIY setups, this is as close as you'll get to the real deal for around a grand.