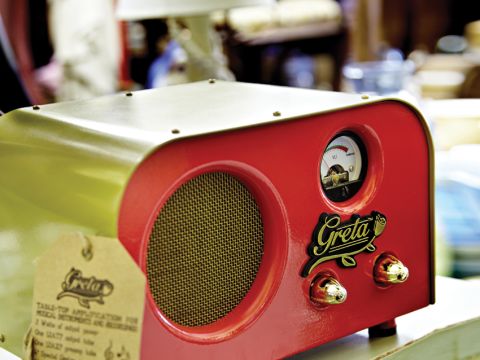 Bags of fun, completely affordable and stylishly bridges the gap between living-room gadget and a proper practice tool.

Just picture the scene. You've strolled into your local boutique guitar emporium. It's a little way out of town, but it's packed with second-hand guitar trinkets, each of them with a story to tell.

The glass-topped counters contain scuffed pedals and rusted pickups. Dusty six-strings hang off the walls. There's a stack of mismatched amps and cabs along the back, with paper tags hanging off the carry handles.

"High-gain addicts will be looking elsewhere for more distortion, but if low- to medium-gain antics are your bag there's plenty to like."

Sat on top of a torn and beaten-up Selmer cab is a gleaming red box that looks a little bit like a 50s radio. What happens next is a whirlwind of Gear Acquisition Syndrome - and a mysterious disappearance of cash from your back pocket.

That's the vibe the bods at Fender are looking to cop with the Pawn Shop Special series amps, and they've nailed it here. It's like they looked up 'cool' in the dictionary, stuck a picture of this amp over the words, and forgot to put 'Fender' on it.

This two-watt valve (yes, valve) amp just oozes that cool, retro-American style. The striking front panel houses simple volume and tone controls, a four-inch speaker, a 'clean to overload' VU meter (which works and responds to your playing) and a badge to let you know what you've just fallen in love with.

Around the back of the amp, things get a little more complex. There's the standard guitar input of course, but next to it is an auxiliary input.

Plug in your iPod or other portable media player of choice and you can either jam along to your favourite tunes or kick back and listen in style. If ever an amp justified being kept in the living room, this is it.

Next up is a line-out enabling you to plug the Greta into another amplifier, and also an eight- and 16-ohm-compatible speaker output for connecting up to a dedicated cab. You might struggle to headline Wembley Arena with it, but with the right amp or cab this opens up a fair few options for taking your tone further than the coffee table. Speaking of which, we think it's about time to plug in.

Starting off fairly modestly with the volume and tone down low, the Greta throws out some pretty decent clean tones. It's nothing to set the world on fire, but that valve responsiveness is there in abundance and for the money sounds worlds away from the 'tabletop' amps we're used to.

Distorted tones are decent on the smaller speaker but really benefit from being plugged into another amp or cab, where the added depth and power comes into its own. High-gain addicts will be looking elsewhere for more distortion, but if low- to medium-gain antics are your bag there's plenty to like - you can always employ an overdrive or boost for extra kick.

Granted, it's not the most versatile or feature-packed tone box ever made, but its valve responsiveness cannot be denied.