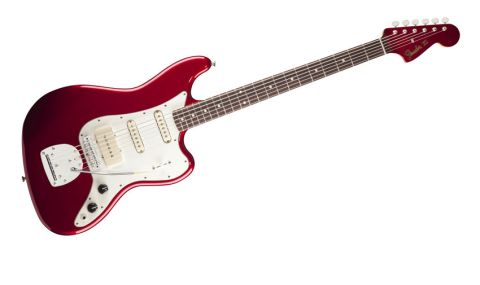 It doesn't look as distinctive as the original, but this bass has a cleaner line and more contemporary sounds.

Originally designed as the ultimate baritone guitar to combat the monopoly of the market by Danelectro's U2, the Fender Bass VI was soon adopted by bass players (particularly in Britain), because it was tuned fully in the bass octave with a very tight, short scale. The original 1961 design underwent a few mods for the revised model in 1963, but nothing quite so drastic as we now see on this eye-catching and much-simplified Pawn Shop version.

Gone are the distinctive chromed metal control and switch plates, replaced by an all-in-one scratchplate that holds the lot. Knobs comprise simply volume and tone, and a standard Fender five-way lever switch now takes care of the pickup selection.

One of the original Jaguar-style pickups has now been replaced by a humbucker (even though it still looks like a single coil), but the lockable floating vibrato system remains, as does the matching headstock colour.

The vibrato unit actually works brilliantly, although you do need to be a lot heavier-handed in using it than you would on a guitar, and a little 'waggle' as you return from a dip will always help to keep it on pitch. The locking feature is a plus, too, particularly when using it as a more conventional bass guitar.

The way this Bass VI speaks is noticeably different from the original design, and not only because of the humbucking pickup. It's really all down to the lever switch, because it means you can't engage the neck and bridge pickups together, or all three, both of which were classic sounds from the original instrument.

That said, the new Bass VI really still is the sort of guitar that's going to inspire you instantly. It might be just that it's so different from what you're used to, but notes and chords take on a totally different character compared with their regular-scale counterparts.

Clean or slightly driven, it's majestic for layering parts in recordings - there's no style of music where you couldn't use it to great effect.