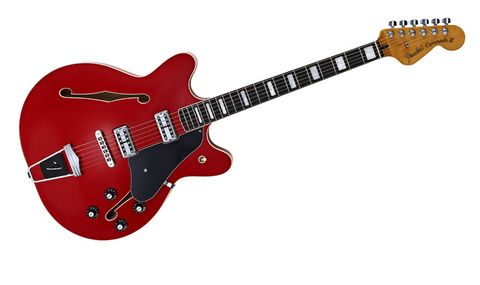 A Fender semi for Gretsch admirers, that conveniently doubles as a fabulous-looking and sounding indie-rock machine.

We'd heard whispers for years, but 2013 finally saw the Coronado make a comeback under the banner of Fender's Modern Player series.

While it wasn't a roaring success on its initial release, the guitar has found enough favour among a range of leftfield musicians and alternative rockers over the last couple of decades to keep interest bubbling away, and the prices of vintage examples on a steady upward trajectory.

Happily, the 'Crafted in China' decal on the rear of the headstock guarantees that this new model is priced with mortals in mind.

Like other instruments in the Modern Player series, such as the Jazzmaster HH and the P-90-loaded Mustang, the Coronado isn't a strict vintage reissue.

Although dispensing with some of the quirks of the original design may irk fans of the vintage model, these largely pragmatic changes help Fender to deliver the guitar at a price, and in some cases arguably make for a smoother ride for the contemporary player.

Our Coronado is finished a little scruffily around the nut, f-holes and pickup cavities - but it's well put together, considering the sub-£700 street price point and production-line origins.

Aesthetically, it's as cool as you like; the timeless Candy Apple Red is our preferred finish. As is customary, there's an upcharge for 'Burst and Natural finishes, which will set you back an extra £48 on the retail price.

With front strap-button position at the heel, Strat and Tele players may find that the standing playing position of both instruments takes a little adjustment, but it's far from a deal-breaker.

Despite the Gibson-style bridge, the basic feel is very familiar and Fender-like, as the guitar features a comfortable medium C-shaped bolt-on neck and 25.5-inch (648mm) scale length, with a taut string tension and a snappy acoustic response.

If we're nitpicking, the maple neck feels a little generic and overly glossy, but it would be churlish to expect the same personality that you'd get from either a vintage original or an instrument subjected to more hand finishing in the manufacturing process. That said, the vintage-style stain looks the part.

Fretwork has been neatly executed, with no sharp, protruding ends. Due to the sheer physical bulk of the traditional Fender bolt-on heel arrangement, the Coronado doesn't provide the kind of easy upper- fret access offered by an ES-335; and along with the tension of the 25.5-inch scale, this means that blazing away in high registers requires a little more stretch and fight from the fingers of your left hand.

You can get up there, but this guitar feels more like a natural platform for interesting chord voicings, low riffing and sonic experimentation than a vehicle for mainstream blues or rock lead playing.

Predictably, Filter'Tron-style pickups in a semi-acoustic chassis make for a Gretsch-like set of tones - it just begs for a Bigsby and lashings of spring reverb. Fideli'Trons don't quite have the aggressive midrange growl or the level of harmonic complexity offered by Gretsch's Japanese-made Filter'Trons or aftermarket TV Jones pickups, but they certainly get in the right ballpark for a variety of styles, from rockabilly and indie jangle, or even to overdriven classic-rock rhythm playing.

And thanks to the centre-block and humbucking pickups, it's much easier to control feedback at stage volume than it is with a vintage Coronado. Whether that makes the ride more or less fun depends entirely on your playing mindset.

If you're a tonehound looking for a guitar for Texas blues or a metalhead who craves bottom-end definition, this instrument is unlikely to be for you. It is, however, a great guitar for indie rock players who love effects, with the Coronado having a decent range at the 1950s rock 'n' roll end of the spectrum thanks to its Gretsch-inspired core sounds.

We wish Fender had supplied a case to accommodate this instrument's unconventional outlines, but that aside, it's great to have the Coronado back in the catalogue.

The Coronado provides a sizeable departure from the vibe of the original, and in this incarnation it's perhaps the most comfortable route into classic Gretsch territory for guitarists who crave that Fender feel and scale length, but don't want to go down the Cabronita route.

Now, wouldn't it be nice if a Road Worn model of this guitar was available for those of us who find the glossy polyester feel a little too 'new'? And perhaps Fender could slap a Bigsby on it while it's at it? We can but dream...