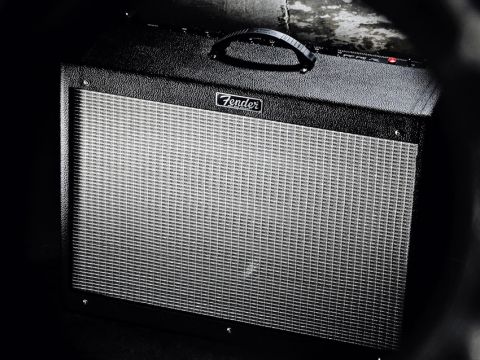 A market-leading amp, updated. Simple, loud and portable, it rewards players with a good sense of touch.

Let's assume for a second you've never seen or heard one of these amps. This would mean that you've barely been to a gig, jam, rehearsal room or music store for over a decade. They're everywhere - the most popular, semi-pro and pro valve amps on the market, and they remain the cornerstone of Fender's modern amp line.

The watershed year was 1995. Ritchie Fliegler arrived from Marshall and promptly discontinued Fender's most successful amps of the time - the Blues DeVille and Deluxe - and evolved them to Hot Rod status, complete with an extra drive stage.

The bigger change here is the control panel, which to date has been silver, with the decals facing backwards. Version III brings a black panel with white lettering with the decals facing you when you stand in front of the amp. It might seem like a small thing, but the legion Hot Rod users out there will tell you that this will make a massive improvement to legibility either on dim stages, or under reflective lighting.

The controls themselves remain as the previous Hot Rod Deluxe, with its dual-channel set-up, powered by a trio of 12AX7 valves. There are two inputs, the first at 1 meg-ohm, as is usual in most quality valve amps, and the second lower than that, which has the effect of attenuating high-end and level.

If you have overly bright, or mega high-output pickups, or perhaps you want a warmer sound for jazz, for example, it's worth experimenting with the second input.

The normal channel has a single volume with no master control, and there's a bright switch for extra zing and presence should you so desire. We had hopes of a separate master volume added to this channel to increase versatility, particularly at lower levels and make it easier to balance with the drive modes, but Fender has chosen to keep it simple.

The second channel is all about overdrive, with the additional mode 'More Drive' selectable either via the top panel, or via the included footswitch. The result is three sounds at your feet - clean, drive and more drive - via the included, and much improved two-button switch.

The two principal electronic changes over the previous Hot Rods are firstly that Fender claims to have 'tightened' the overdrive: "More attack and less slop on the lower strings," according to Fender senior product manager and amp expert Shane Nicholas.

Secondly, the volume and treble controls have a new taper, designed to make the lower regions of the control more gradual.

"The Hot Rod Deluxe had a reputation among some users for being quiet on one-and-a-half and loud on two," continues Nicholas, "so we changed the taper of the control for smoother response. We did the same thing with the treble control. This is especially appreciated by players who use the amp at home, yet it won't bother the gigging guitarist."

We do wonder who buys a Hot Rod Deluxe to use purely at home, under two on the volume - it's a very loud amp - but nevertheless, Fender clearly thought that it was a big enough deal among current players to make the change.

Fender approaches its series effects loop with two jacks titled Preamp Out and Power Amp In; think of them as send and return respectively. There are no designated level controls, so you might have volume issues with overly quiet pedals if they don't have their own level attenuation.

This is no different than plugging certain pedals straight in the front-end of the amp, of course. And when you do, the Hot Rod's normal channel has always been a brilliant base to layer pedals on, thanks to its high headroom and dynamic range - version III is every bit as good as its predecessors in that respect.

On the inside, this is very much the modern valve amp; a custom PCB layout so they can be manufactured to a consistent quality in high numbers. Well designed and put together, this isn't circuitry as art, but the seemingly countless Hot Rods out there are testament to its general road-worthiness.

The biggest issue that we're aware of to date is with the reverb, where the tiny wires in the tanks themselves can come loose. Thankfully it's a safe, easy and cheap fix, if you need to.

The reverb in the Hot Rods isn't valve-driven as it is in higher-end Fender amps, such as the Super Sonic and some vintage reissue and custom models. Instead it has its own little op amp to drive the signal to and from what some see as a clunky, mechanical relic from yesteryear; others as the absolute and only way to create reverb in guitar amps.

The other significant change in the version III Hot Rods is that there's now a Celestion speaker on the end of the dual-6L6 40-watt power stage, instead of the previous Eminence driver.

Replacing the speaker has become a common mod for Hot Rods, so Fender has chosen to change it to a 12-inch called the G12P-80. Not a million miles from Celestion's current Seventy 80 model, it has an 80-watt power handling capacity and 98dB sensitivity with a 31oz ceramic magnet. So let's see how it…

You haven't heard clean until you've heard it from a 6L6-equipped Fender amp, and short of the hand-wired Custom stuff, this is as good a place as any to get it. The Deluxe III's normal channel has all the shimmer to make single-coils sparkle, but it's the room-filling bass, coupled with the slightly scoopy mid-range that completes this sound.

We have to note that all of the above is significantly improved when using a high-quality cable between guitar and amp.

Drenched in reverb, what emanates from the largely open-backed combo is an almost 3D quality that makes you want to call-and-answer with chords and melodic phrases all day long.

As you turn up the wick, you can introduce some light overdrive, especially with more powerful pickups, but we're talking about gig volumes for that. With or without pedals, this channel alone will out-shout most 'normal' volume acoustic drummers.

The reverb is sweet, spacey and old-school evocative, but it can start to feel unrefined as you go much past three and dig in hard, certainly when compared with more advanced circuits in amps such as Vox's AC30 Custom and the Mesa Lone Star series. It's still infinitely better than many of the digital reverbs cropping up in some low/mid-priced valve amps, however.

The drive channel is where things have changed most over the previous Hot Rods. There was a tendency for the overdrive to become somewhat ragged sounding, especially with single coils and your guitar controls maxed-out.

Heading straight for 'more drive', the Deluxe III returns a notably richer distortion with what feels like a more musical harmonic structure. It hangs on to the bottom-end with more authority, too, so it doesn't become muddy unless you want it to by adding tons of bass.

There's still plenty of high-end, which is good news for more powerful humbuckers and darker sounding guitars in general, though with vintage-style Strats and Teles, you'll be reaching for the tone pot on your guitar for fatter, modern-style gains.

There's tons of overdrive on tap; full, saturated Gary Moore-type blues that can also veer into that mid-rich 'boutique' area, and heavy rock riffing if you need it, with the mids dialled down.

Going back to the Drive mode in channel two - the LED goes green from red - the gain level drops off to a bluesy/rocky crunch. Depending on guitar, it can span softer, Hendrix and SRV-type chordal stuff, through to more strident and spiky punk-derived Arctic Monkeys/Strokes sounds, then on to smoother classic rock rhythms.

There is some compromise involved in the shared EQ and single drive pot, but to us the relationships make sense when flicking between modes. We find that putting the drive control somewhere between five and nine (it goes to 12) covers most blues, classic rock and heavier/more contemporary rock applications, depending on the guitar you're using.

Whether it's the revoiced overdrive or not, this speaker feels like a real improvement over the previous Eminence model. It's less spiky in the upper mids and low trebles for the most part - but as we say, do watch those tone controls with bright guitars.

What a superb amp. Fender has done the smart thing in providing a wide range of tones from classic clean, to more saturated, harmonic drives from one simple row of knobs.

We know that from Hot Rods past, of course, but the updates - the more focused overdrive, easier-to-read-controls and the improved speaker - are all changes that players are going to feel and hear straight away.

The caveat is that the Hot Rod Deluxe III requires that you interact with it as an instrument, rather than simply treating it as a noise box. With neither independent EQ for each channel, nor dual gain pots in the overdrive modes, the true extent of this amp's versatility lies in your guitar's controls, and your fingers of course.

Some amps don't offer that kind of dynamic and flexibility, and it's fair to say that not everybody likes to play that way. For those who do…

The Hot Rod Deluxe has become popular for good reason, and this version III update will only continue that excellent reputation.