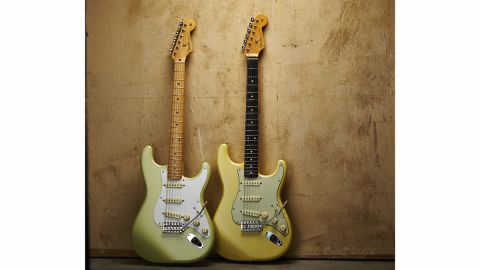 A pair of decently turned-out Strats that look, sound and play convincingly vintage, at a very reasonable price.

Fender's triple-pickup masterpiece was an instant hit on its arrival in the mid-1950s and has remained that way ever since.

One of a number of ways Fender keeps the format fresh is with special and limited-edition runs, and the latest one has just arrived in the shape of a series of Mexican Strats in special-colour finishes.

During the golden years of Fender's early production, the company frequently used the DuPont paint catalogue for its finishes, choosing shades often found on popular cars of the same era, usually from General Motors. These car-derived colours were designated as Lucite, a form of acrylic, though a nitro clear-coat was often applied over the top, meaning the outward appearance of finishes such as Lake Placid Blue yellowed over time into different hues altogether, forming part of the charm of vintage Fenders. So much for history.

The twist with this latest special edition is that all the guitars are finished in vintage car colours that weren't originally used by Fender. We're taking a look at two here: a '50s-style Strat finished in Apple Green and a '60s version in Canary Diamond Yellow. And if they don't float your boat, the '50s is also available in Jetstream Blue and Rangoon Red; the '60s in Lilac and Cerulean Blue.

Both our review guitars come from Fender's Ensenada, Mexico plant and follow the traditional vintage-style layout, so we have a small pre-CBS headstock with drilled and slotted tuners, a choice of maple or rosewood fingerboards with narrow fretwire on a 184mm (7.25-inch) radius, four-bolt neckplates and a vintage vibrato bridge, with pressed steel saddles and six screws.

The '50s Strat gets a plain white single-layer scratchplate; the '60s has a three-layer aged 'mint green' plate. Both have the same electronics: a trio of vintage single coils under aged white covers, connected to a five-way selector switch, with a volume and two tone controls.

The finish is generally very good, though we'd have to say we're a little disappointed with the body contours, which aren't accurately shaped and lack the finesse found on other models. There's also a noticeable edge to the radius'd outline, which should have been blended into the top.

Both guitars are adjusted in a more or less identical manner, with the vibrato bridge floating and quite a high action - not ideal for all players, and a setup that trades tuning stability for that upward pull on the vibrato arm.

The vintage narrow fretwire is just high enough for comfortable string bending with the factory 10s - but only just. The neck profiles are slightly different, too: a medium 'C' shape on the '60s rosewood example and more of a 'V' on the maple 'board '50s guitar.

In use, both the '50s and '60s guitars have all the sounds you expect to get from a Strat - we particularly liked the neck and position 2 (bridge and middle) settings with a little top rolled off.

The bridge pickup is good, but a little too raspy; it's very difficult to get a perfect balance of body combined with the aggressive top that a great Strat bridge pickup needs, while retaining subtlety and sustain when played clean.

For us, the bridge pickups on these guitars are a decent seven out of 10: great for overdriven blues or rock, less so for country, slide and roots stuff. Use a decent compressor and a touch of reverb, though, and you can pick like Knopfler, or play over the end of the neck while holding the vibrato arm for a passable Marvin sound.

While the '60s neck looks the part with its dark rosewood 'board, we actually found the lacquered maple '50s Strat nicer to play - it was easier to bend notes and doublestops and just felt a little friendlier, with a touch more sustain.

The subtle shades certainly look like they could have come straight out of a period Fender catalogue, even if Fender never used them. Canary Diamond Yellow is a good match for the colour in Dodge's 1959 options list. Apple Green is harder to pin down - the colour is closer to that used on some modern NYC taxis, while the name was certainly used on Chevy trucks from the 1940s. If neither appeals, but you still fancy the idea of an exclusive tint, there are four others to look out for!