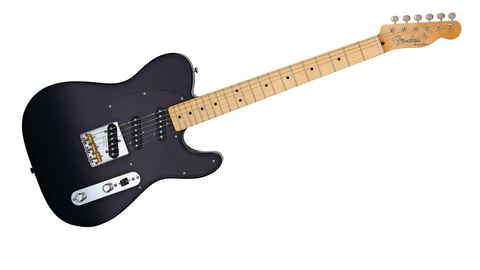 Lightweight 50s-vibe Tele with three Tele bridge pickups. Daft? Not at all - a great 'Strat' for the Tele player.

Ever lusted after a Fender Custom Shop guitar but realised you can't afford it? We certainly have, and that's where the Classic Player series comes in. Three new models have appeared this year, including this Triple Tele.

Classic Players are designed by the Custom Shop's top guitar makers, but made in Mexico. Now in its eighth year of production, the series includes some of our favourite models, such as the Cabronita and Baja Teles. Will this one join the ranks?

Designed by the Custom Shop's Todd Krause, there are no prizes for guessing where this one gets its name. It comes from the three Tele bridge single-coil pickups - one in the 50s-style Tele bridge plate with three brass saddles, the other two mounted to the scratchplate, but at the same treble-favoured slant as the bridge.

Spec'd as Nocaster bridge pickups, they all appear identical with flush magnetic pole pieces and rear grounding plates, and all have similar DC resistance readings of approximately 6.7, 6.6 and 6.65k ohms from bridge to neck respectively.

If that's a pretty radical pickup configuration - we can't remember coming across this before - the controls are dead simple: a five-way pickup switch offering the usual Strat-like selections, paired with master volume and tone.

In addition, there's an alder body, hidden by an opaque polyester finish, and gloss untinted maple neck, plus there's a maple fingerboard - in traditional style, it's the face of the maple neck not an additional piece, with contrasting rear skunk stripe.

The Triple Tele is a real surprise in all the right ways. Firstly, it has a lovely feel - light for a Tele, with a subtly thin neck depth - but it's really pretty. The combination of the gloss finish to the 'board and the smaller vintage frets play their part - the TT feels 'vintage', as if you were playing it brand-new on the day it was made.

It's certainly lively, with a very slightly bright acoustic response. Plugged in, the TT certainly has more high-end zing about it on the bridge pickup than our comparison Baja Tele, and by comparison the Baja sounds as if you've knocked back the volume and tone a bit. And from that point on, the two guitars move away from each other though still, of course, retain bags of Fender hallmark twang and percussive bite.

The TT's middle pickup is quite a powerhouse, the highs seem slightly rounded on both this and the expectedly warmer neck pickup - both are authorative sounds with a slightly more focused P-90 tonality about them.

The mixes take us even further into Strat territory and sound textured and slightly hollowed, as you'd expect, albeit slightly darker and, we have to say, less clichéd. On crunchier amp settings, the TT rocks very nicely: raw and resonant.

If we're honest, it's one of the better Tele/Strat hybrids we've played, not least if you're coming from the Tele side, as the middle pickup here, with its flush pole pieces, doesn't get in the way for fingerstyle or hybrid picking.