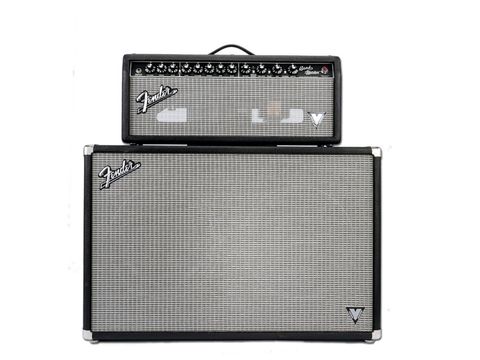 A good all-rounder that could run and run for Fender. But will it last as long as its namesake? Only time will tell…

The Bandmaster VM head and its accompanying 2 x 12 cabinet are the latest additions to Fender's Vintage Modified range of amplifiers, which aims to blend elements of vintage and modern amps together.

The head is named after on of Fender's most revered classic models, but when you get beyond the blackface styling, you'll find modern two-channel flexibility and bang-up-to-date digital effects.

The big selling point about the VM is that it's a hybrid design, but not the usual 'solid-state with a token preamp valve' type of hybrid.

Rather the amp combines a dual 6L6 valve power stage with a valve and solid-state preamplifier.

This isn't a new idea - Music Man was doing a similar thing way back in the early 80s with the RD series and so was Roland with its excellent Bolt combos.

But it's unusual, as it costs more to build than the reverse concept, and the valves actually have to do something more than just glow red.

As mentioned, the styling is closely based on Fender's classic 60s blackface amplifiers.

But Fender has added a small 'VM' badge to the front grille and done away with the metal corner protectors you'd find on a 60s blackface, although they're present on the 2 x 12 cabinet.

This cabinet has just one strap handle - it isn't particularly heavy but it is unwieldy and being a closed back design there's no other way to carry it.

Fender should really consider adding a pair of grab handles to this box, after all it isn't supposed to be a re-issue.

While we're on the subject, a pair of the large knurled bolts that traditionally fixed Fender heads to their cabinets would also be useful.

The Bandmaster VM head has a simple cut-out underneath which slots over the loudspeaker cabinet's handle, but it doesn't do a very good job of keeping it in place.

The tough screw-in three-piece glides that used to be found on the bottom of a Fender amp have also been reduced to steel studs, which are simply hammered into place.

They'll work fine as long as they stay there, however, if one should fall out this mundane part could become a major annoyance.

One thing that's sadly become a tradition on modern Fender amps, is the flimsy cereal box rear panel material - how much does two square feet of quarter inch plywood cost?

The Bandmaster VM electronics are contained within a sturdy wedge-shaped open-ended tray chassis, with folded returns on each side to improve rigidity.

At the thin end, all the front panel components apart from the pilot light are fitted onto a single through-plated and double-sided PCB, with the DSP (Digital Signal Processor) on a smaller daughter board.

The thick end is home to the rear panel stuff, valves and power supply, housed on two non-through-plated boards.

The PCB holding the valve bases is adequately supported on solid metal standoffs, however, the chassis layout means the preamp valve bases are deeply recessed, making valve replacement a pain.

Overall, the general standard of the components, layout and wiring is better than average for this type of modern mass-produced product.

The control panel is easy to understand, even without the aid of a manual.

The clean channel features volume, bass and treble controls, while the lead channel has the usual gain, volume and three-band EQ arrangement.

After this comes the effects section, which features reverb, delay and chorus - all digitally generated.

The reverb is governed by a single level control and is a reasonably good facsimile of a Hammond spring, while the delay and chorus effects share knobs for rate/time, mix level and repeats/depth.

You press a small button on the panel to select delay, dial in your preferred settings and then press another small button to use the same knobs to adjust the chorus effect completely independently.

This means you can go from a wide, slow chorus with a single hard slapback delay to fast wobbly almost Leslie-type stuff with long delay and endless repeats.

Once tweaked, the amp remembers your settings until you alter them again, but there's no programmability as such.

It's an ideal set-up for a player who might use one or two pedals but doesn't want to get bogged down with editing endless parameters.

The rear panel is easy - a pair of sockets for the series effects loop, a pair of speaker outlets and a DIN socket for the amp's supplied four-button footswitch, a reassuringly chunky affair that swaps channels and toggles each effect on or off.

You can access the same functions as these from small switches on the front panel, with the exception of reverb.

The clean channel is typical Fender - fat bass, smooth mids and a rich, sugary treble that's perfect for practically any clean tone you might want.

There's plenty of headroom on this channel too, with the amp refusing to break up until the volume control is pushed past nine.

Just as this channel's tone typifies classic clean Fender, so the VM's lead channel is classic 60s Fender overdrive, with a smooth distortion effect and plenty of gain to handle anything from country to blues or rock ballad stuff with ease.

Once again, there's plenty of volume on this channel, even with the single speaker combo.

The Bandmaster stack is loud and fat and sings when clean or mildly distorted sounds are put through it.

However it suffers under heavier overdrive when the bass just turns to mush and loses definition.

The VM's digital effects are very good - as mentioned above the reverb is a fair replica of the traditional spring, although the level is excessive and most players will never turn this control beyond two.

The delay and chorus effects are rich and warm, with a maximum delay length of around two seconds and plenty of depth on the chorus to cover most needs.

The amp's dynamic range is good, but lacks the depth you'd expect from a traditional all-valve Fender, resulting in a slightly stiffer response - however many effects users may not even notice this.

One could argue that the Vintage Modified tag is perhaps a misnomer as this amp is patently neither.

Nevertheless, the Bandmaster VM is a well-executed modern guitar amps that have enough range and flexibility to cope with practically any gig.

Of course, some people might say the same thing about their 45-year-old namesakes.

But the reality is that you'd need a bunch of pedals and a tangled mess of leads and power supply cables to emulate what the VM amps can do.

What's more, a 6V6-powered Deluxe could never match the headroom of the modern 6L6-powered VM equivalent.

The punch of two loudspeakers in the Bandmaster's large cabinet provides plenty of level for larger gigs, as long as you can live with the lack of portability.

The head and stack both look good too, although the iconic style of the classic blackface Fender amp has been diluted by leaving off those metal corners on the head.

However, many younger players will have never seen a 'real' Fender amp in the flesh, let alone plugged into one, making small details like this largely irrelevant.

The VM is good value for money compared to the competition; especially as the build quality is superior to many Far Eastern-manufactured products.

However, exchange rate trends mean these prices may increase sooner rather than later.

If you're a working player looking for a tough, good looking, all-in-one-solution at a very affordable price, we this package comes very close to ticking all the right boxes.