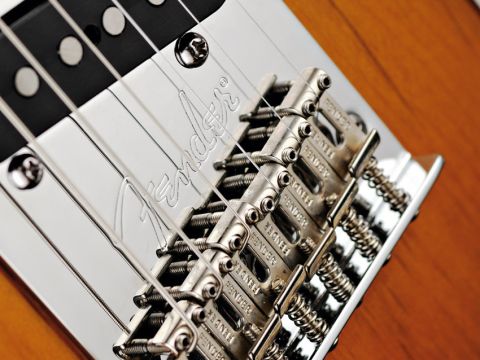 A great performer, especially for modern rhythm styles but loses a little of the classic Tele identity in the process.

The original Fender American Standard (introduced in 1986) and the later American Series guitars (unveiled in 2000) were always about no-nonsense gigability. The new-for-2008 American Standards are no different. Pulling the Telecaster from the chunky and frankly excellent new rectangular Fender/SKB case there's a definite sense of purpose. This isn't an instrument to covet - it needs a stage. 1, 2, 3, 4...

The Telecaster, by nature, was - and remains - the Fender workhorse, and in comparison to the American Standard Strat, it seems almost primitive. The rosewood 'board offers a less slinky feel and although the dimensions are virtually identical (43.7mm at the nut, 21.8mm deep at the first fret, 22mm at the 12th), it does feel just slightly bigger in the hand.

Fretwork is equally good, although without the finish to the fretboard face the frets feel, and measure, slightly taller for a subtle difference. Likewise the neck tint here is a little yellowed compared to the more natural reddish hue of the Strat, while the rear skunk strip is much darker than the Strat's pale hue.

The square-edged, alder body appears to be one-piece through the nicely old-style three-colour sunburst. We suspect, however, that Fender still uses a pre-laminated body 'spread' with typically three pieces and a veneer to top and back.

Either way it's a tidy job and, with a new thinner finish it avoids looking over plastic-y. The Tele uses a four-screw neck fixing, with the micro-tilt adjustment, and the necks is extremely well fitting and doesn't want to budge, even with considerable pressure applied.

The guitar retains the same American Series tuners and electronics package - two Tele American single-coils, the neck pickup covered and the bridge pickup with flush poles, a three-way lever selector and Delta Tone control - but changes occur with the bridge.

We get newly improved 'vintage-style' pressed steel saddles - frankly very un-Tele-like - on a chromed brass plate (as opposed to the classic recipe of brass saddles on a steel plate) with a stylised Fender logo that, as Fender intends, is a nod to the design of sixties-era Fenders (like Jaguar and Mustang bridges).

Although those intonation screws seems less tall than true vintage spec on the Tele, they still protrude uncomfortably - to get them to sit in the saddles requires a deft tweak of the micro-tilt neck adjustment slightly raising the saddles' height.

But Strat saddles on a Tele? "We just view the bent steel saddles as 'Fender saddles'. And the previous cast American Series saddles are hardly true Tele saddles... these actually have more history and rights to be on a Tele if you think about it," argues Fender's Justin Norvell.

"We wanted the bridge to have six saddles for intonation, but your typical six-saddle Tele bridge has those small lightweight saddles and the sharp ashtray edge. So, we tested the new bent steel Fenders out and they just opened the tonal spectrum up. They have a great and less compressed sound." Let's have a listen...

If a guitar can be awkward then this Tele is, and frankly it's hard to put our finger on why. The neck feels fairly contemporary and the acoustic ring is lighter than either of our (ash bodied) reference Teles. Perhaps that's no surprise; the bridge here is going to play a major part in the guitar's fundamental tone and we hear a more open, less powerfully strident and modern sound than either the previous American Standard or American Series.

So, the back pickup seems to have higher highs, less balls in the mids and a slightly softer low end - some of which can certainly be attributed to the alder body's more woody, less spiky perceived tone.

It sits therefore in an unusual place with plenty of Tele character, for sure, but perhaps not quite enough to satisfy a more experienced player. That said for a lot of more contemporary styles, quite gained and rhythmic, the American Standard more than shines.

The mixed sound is very wide with more of a Strat-like zing to the high end and, while the neck pickup lacks some of that percussive wood, the slightly softer but papery-edged sound proves more than effective for jazzier lines. It's hard to know what to think. For many, it looks like a Tele so it clearly sounds like one. For others - maybe like us - it'll be a case of getting used to a slightly left-field Tele sound that lacks some of the original's frankly brutal character.

Although this Telecaster leaves us slightly confused with its Strat-like saddles that, to us, put it into a 'Hot Rod' or 'Modified' category, it's still a cracking guitar. Call us traditionalist, but it remains the slightly left-field model of the new American Standard series.