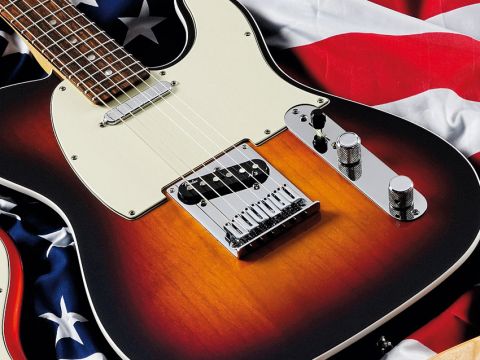 A brilliant choice if you find vintage reissues hard work.

Every Coke has a Pepsi, so the saying goes. Imitation is the sincerest form of flattery, goes another. And so Fender's timeless 'big four' designs have become the most imitated electric instruments in the world, be they vintage replicas or modernised interpretations.

Many of these inspired-by brands were established during Fender's post-CBS turmoil and through the eighties rock explosion. A quarter of a century later, the best of the imitators are still there, but Fender is now a radically different company: giant, dominant and without doubt producing the best guitars it has ever made.

"The Telecaster is the more traditional sounding of Fender's two new Deluxe guitars, retaining much of a good Telecaster's overall character and resonance."

So when Fender releases a new series, we take note. In this case, the American Deluxe Series has been overhauled with notable build, spec and playability improvements over the previous models.

This uses a sixties Tele Custom-style bound alder body, albeit treated to a rear belly contour, plus the same sculpted heel of the new Deluxe Strat for easier high-end access.

As with the Strat a lovely piece of rosewood tops a similarly spec'd neck, with the same medium-jumbo frets and conical radius. The slim depth and rounded shoulders are inviting to anyone who likes neither fifties-inspired clubby necks, nor the wafer thin and wide Ibanez JEM approach: dare we call it vanilla?

Salient hardware points include six chrome-plated brass saddles (new American Standards have Strat-style bent steel saddles). Each is separately adjustable for optimum action and intonation and they all sit on a flat-plate bridge without the rising sides of the vintage-style Tele plate. Strings are anchored through the body.

Like its Deluxe Strat counterpart, this guitar features Deluxe locking tuners. Smooth and stable in operation, it's quicker to change strings and the staggered-height pegs help maintain good break angle over the nut without the need for a second string tree. They do add marginal visual and physical bulk however, and for many, vintage-style slot-head types are as good as it gets.

Fender persists with the slightly recessed vintage-style barrel jack socket, which won't take, for example, a right angled Neutrik plug. That said, neither will the Strat's jack socket (without looking silly, anyway), so as long as you have straight plugs, all is good.

The Tele's N3 pickups are both an Alnico V magnet stacked-coil design, with the Tele's usual three sounds extended to four thanks to both pickups in series with the S-1 switch engaged.

Fender's No-Load pot also adorns both new Deluxe models (as the master tone here on the Tele) and has a notch at the end of its travel: it's brighter and more present, simply because it's not physically there in the circuit.

The Tele comes with a quality moulded SKB case and straplock buttons as standard. They'll work with a 'normal' strap, or one fitted with Schaller straplocks - two of which you'll find included.

The Telecaster is the more traditional sounding of Fender's two new Deluxe guitars, retaining much of a good Telecaster's overall character and resonance. And while it doesn't bite or spank quite as hard as, say, an American Vintage Series instrument, the slightly smoother delivery will appeal to players who don't like their Teles too unruly.

The rosewood fingerboard doubtless helps in that regard too, with its more colourful mid-range compared with maple. For country snap, sizzling blues, rock crunch and even jazzy neck pickup moments, this Tele, like the countless variants before it, is a brilliantly versatile guitar.

Push the S-1 switch in while in the middle position, and you get a boost in level that will push the amp that bit harder. It's a big sound, but you need to keep a focused sound from the amp to stop things getting too mushy.

As far as we can tell, the S-1 switch isn't supposed to do anything in positions one and three. We checked and checked again, and we think it has a tiny, almost imperceptible effect in that the delivery is marginally - very marginally - softer with the switch out. We're talking hair-splitting levels here.

The No-Load tone control simulates what happens when there's no pot in the way of the signal flow. You get extra edge and bite, which can sound pretty harsh at low volume and with a just-breaking up amp, but comes into its own more at serious volume with a quality valve amp, where the weight and power in the mid and low frequencies is there to provide the right balance to the otherwise brittle top end. Seriously no complaints.

This Deluxe Tele, once again, typifies what Fender does best with confidence. Extremely well built, addictive to play and walks that fine line between warm, fuzzy nostalgia and modern tone and playability traits.

The S1 switching options are much improved on those of old, and while these latest N3 noiseless pickups are as good as any stacked-coil pickups we've ever heard, in a straight tone fight we'd still go with the best of the true vintage-style single coils.

This is a highly credible, professional level instrument. Give it a try.