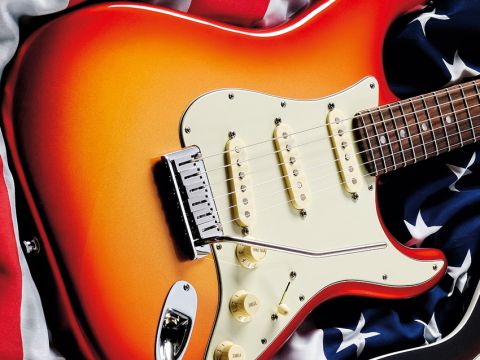 A quality blend of vintage and modern.

Every Coke has a Pepsi, so the saying goes. Imitation is the sincerest form of flattery, goes another. And so Fender's timeless 'big four' designs have become the most imitated electric instruments in the world, be they vintage replicas or modernised interpretations.

Many of these inspired-by brands were established during Fender's post-CBS turmoil and through the eighties rock explosion. A quarter of a century later, the best of the imitators are still there, but Fender is now a radically different company: giant, dominant and without doubt producing the best guitars it has ever made.

So when Fender releases a new series, we take note. In this case, the American Deluxe Series has been overhauled with notable build, spec and playability improvements over the previous models.

It has all the right curves, a deep belly contour and beautifully radiused edges that look and feel smoother and sleeker than many of the lower and midrange Strats we've seen over the last couple of decades.

The bolt-on maple neck (with a very smooth, more semi-gloss 'satin' finish) has a modern-feeling shallow 'C' profile, which maintains pretty uniform depth until it contours out to the heel.

The nicely dark, well-oiled, edge-rolled rosewood fingerboard has 22 medium jumbo frets that facilitate easy bending, again offering a more modern feel. This is taken a step further by the fact that the 'board also has a conical radius: 241mm (9.5-inch) at the first fret, and 356mm (14-inch) up the dusty end.

It means that chording feels more comfortable down the bottom, there's no choking when you bend up the top, and indeed a lower action overall. If you've never experienced a compound or conical radius 'board, do try it, assuming you're not too vintage-minded to get past the pearloid dot markers of course…

And call us old fashioned, but how much better does the Strat's 22nd-fret fingerboard overhang look when it's tastefully rounded off, rather than left more square like the Telecaster's board?

The two-point/pivot modern American-style bridge is set up to float, with a push/snap-in arm that negates all the screwing (and loosening) you have with a six-screw vintage vibrato.

It's smooth and effortless, with impressive pitch stability for all but the wildest whammy abuse, though do be aware of marginally tighter string spacing compared with a vintage-style bridge. If you're used to the relative inertia of a vintage-style Strat vibrato, it will feel flighty, especially when palm muting, but you can always add another spring, and adjust the tension screws accordingly for a tighter feel.

Fender has also redesigned its noiseless pickups and come up with new N3 variants. It's still a stacked-coil design, the samarium cobalt magnets of the previous SCN versions are replaced with Alnico - V for the slightly hotter bridge pickup, II in the middle and III at the neck. Intriguing…

The American Deluxe Series first received Fender's S-1 switching in 2004. It's been tweaked again to give a set of sounds that feels more logical to us. So, S-1 switch out, it works like any normal five-way Strat pickup switch.

Push the S-1 switch - located in the top of the volume pot - and position one (bridge position) gives you all three pickups in series: the loudest, fullest sound on tap. Position two is bridge and middle in series; position three, mid and neck.

With the Strat through a clean Fender valve amp, there's a springy selection of classic, quality Strat tones: breathy in-between sounds, a rounded, neck pickup and a bridge setting that can handle gain with the tone pot rolled back a touch.

Compared with a good American Vintage, there's less depth and sense that the whole instrument is working as one, perhaps due to the two-pivot bridge, perhaps because the stacked-coil pickups are - by definition - cancelling some of the whole picture you get with a great set of true single-coils.

It's neither better nor worse but it is different, noticeable in the context of a direct A/B test, less so in a band mix. As you add gain and volume, the noiseless part of the equation starts to pay dividends.

Where vintage single-coils are plagued by lights, computer monitors and other extraneous sources, the N3s perform far, far better, which will be good news to those of you who don't like to ride the volume control or move about to avoid noisy spots. Home recording? Tick.

Pushing the S-1 switch changes the guitar's persona dramatically. In position one you get a significant level jump, and with all three coils in play you have the bite from the bridge and the meat from the neck, but do be careful with the amp's bass settings. In any case, it's an excellent one-step kick for huge-sounding solos.

The other S-1 series positions are ballsy too; bridge and neck is a particular favourite for a meatier push, likewise middle and neck, while the bridge and neck setting gives the widest frequency response.

Position five sounds honky and thin; you may think it isn't much use for anything, but don't write it off - try it in a busy band mix for a focused rhythm tone, or as a layering tool for recording.

This American Deluxe Strat, once again, typifies what Fender does best with confidence. Extremely well built, addictive to play and walks that fine line between warm, fuzzy nostalgia and modern tone and playability traits.

The S1 switching options are much improved on those of old, and while these latest N3 noiseless pickups are as good as any stacked-coil Strat pickups we've ever heard, in a straight tone fight we'd still go with the best of the true vintage-style single coils.

This is a highly credible, professional level instrument. We recommend you give it a try.