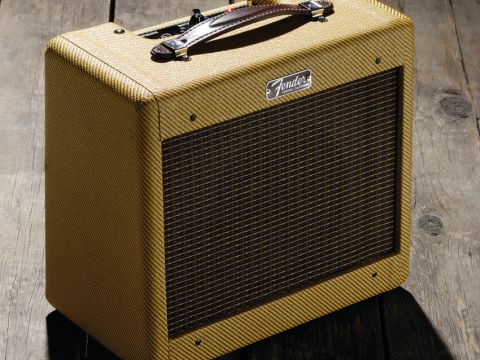 Definitely worth checking out if you want to hear the real deal.

The year 1957 was one of change. A Texan singer called Charles Hardin Holley changed the name of his backing group to The Crickets, and recorded a single called That'll Be The Day. The Soviet Union changed the world by launching Sputnik 1 into orbit and the UK did some gardening in the Pacific, changing a small island paradise into a radioactive crater with its first hydrogen bomb.

Meanwhile, in California, a small (but for us guitar players equally significant) change happened when CL Fender modified the circuit of his Champ amplifier to remove a filter choke and a couple of other small components. This historic event was recorded by changing the circuit designation from 5E1 to 5F1, resulting in an amplifier that would make a little history of its own - the famous 'Narrow Panel' Tweed Champ.

Originally intended as a small, inexpensive practice amp for beginners, the overdriven distortion that occurred when you turned the Champ's single volume knob all the way up to 12 made it a hit with many producers and top players all over the world.

According to legend, Duane and Eric plugged into the tweed Champ for the Derek And The Dominoes classic Layla. Practically every early ZZ Top album features a Champ and the same thing goes for many Rolling Stones recordings.

So unsurprisingly, when Fender stopped producing them there was still a healthy demand, which continues to be filled by many boutique builders. The simple circuit, which has fewer components than many modern amps have control knobs, also became a favourite for home-build enthusiasts.

Now, 52 years later, Fender has re-released the original small recording amp that so many other amplifier manufacturers have emulated. It may have originally been the least expensive item in Fender's amp catalogue, but times change and this reissue is in the top-drawer Custom range, with a price tag to match.

The solid pine finger-jointed cabinet is accurately covered in lacquered tweed fabric and has a period-correct leather carry handle and nail-on logo plate. The lettering underneath the Fender logo says 'Corona California', rather than the original 'Fullerton California' legend.

The chassis is chrome-plated with white lettering and there's just one control - a volume knob that goes up to 12. This knob originally incorporated the on/off switch, which was prone to breaking, but on the reissue Fender has sensibly put a separate mains toggle switch in the hole formerly occupied by a fuse-holder.

This could have then been easily relocated to the bottom of the chassis but, annoyingly, Fender has opted to put all the fuses on board-mounted holders. Modern safety legislation is responsible for the addition of a steel cage around the amp's three valves and a ventilation grille in the rear panel, with more slots for cooling in the chassis ends.

Inside, the circuit is built up on an eyelet board in much the same way as an original would have been, except the layout is slightly different and the components have been updated and upgraded. For example, the hook-up wire insulation has been changed from cloth braid to modern flameproof PVC.

The original earth layout has also been changed from the potentially lethal original arrangement to something safe for 240V use. The quality of wiring and soldering is sound, but not overly neat and tidy.

So what we have is not a true replica, but an updated reissue, which retains much of the original vibe and is considerably safer and more reliable than an original. As long as you don't look too closely there's nothing to tell them apart other than the lack of 50 years of wear and tear.

The Champ's sounds are very close to what you'd expect from an original, with a touch more sizzle and zing to the top end. This is the archetypal 'Tweed tone' alright, fat mid-range, tight bass and a bright but not piercing treble.

Fender upgraded the Champ from a six-inch speaker to an eight-inch one towards the end of 1957, which was a pretty big improvement. While many have fitted their Champs with 10- or even 12-inch drivers, the eight-inch cone is the secret to the amp's superb recordability.

This re-issue is fitted with a special design from vintage speaker specialist Ted Weber, which offers greater sensitivity - and therefore volume - than the original.

The compressed frequency response offered by this speaker means it records more easily than many 1 x 12 combos. Stick an SM57 or an Electrovoice 635 a few of inches away from the cone, with just a touch of compression and no EQ, and you'll be making hit tracks in seconds.

Using a regular Strat, the Champ is reasonably well behaved up to around four or five on the volume control, at which point the characteristic smooth breakup of the 6V6 starts to become noticeable. From six to 12, the amp doesn't get much louder, it just gets more distorted, but in a very nice way that begs you to dig in hard and give it some.

Use a humbucker-powered guitar and you'll get the same effect but more of it, with better sustain but less clean headroom. There's a nice natural compression that comes from the 5Y3 rectifier, which makes the amp respond in a very lively way that's great fun.

The Champ's noise performance is good, but not brilliant - the reduced mains filtering on the 5F1 increased mains hum but also improved the tone and response compared to the 5E1 circuit.

If you're a boutique builder, turning out one amp a month from your garage and dealing directly with your customers, you don't have to adhere quite as closely to manufacturing legislation as Fender does. So changes that might be perceived as making this Champ 'less authentic' have to be taken in context - Fender doesn't really have much choice in the matter.

Overall, it's as close as it can be to the original spec, while keeping the CE mandarins happy. It certainly sounds the part and records well too. However, it's a shame that what was a great-sounding and affordable beginner's tool has to be elevated to the Custom Shop ivory tower, with such a restrictive price tag.

Nevertheless, buying this re-issue is far more sensible than spending even more money on a dog-eared ancient Champ that would probably need a complete rebuild before it could be used safely. If you want to hear how it all started, this is as good as you can get.