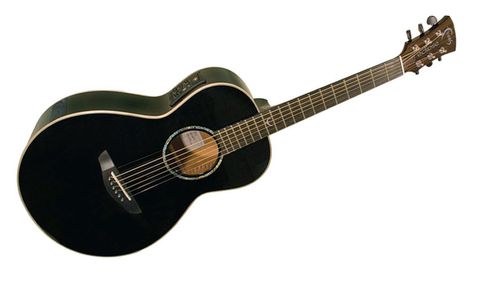 It seems Faith gave the Eclipse Mercury sophisticated looks to reflect the first-rate technology it hides under the hood. It's a combination with all sorts of potential, and makes the Eclipse Mercury a versatile and exciting tool in the armoury of even the most technophobic guitarist.

The parlour acoustic guitar has all but disappeared from modern life. There just isn't the space for reception rooms these days. It's probably something to do with the decline of manners, the dissolution of civilisation or texting. Regardless, the parlour-sized guitar remains, and thank the heavens it does, for Faith has just released an absolute cracker.

The Eclipse Mercury is small in stature, but it has shoulders broad enough to support all your hopes and dreams. A glossy parlour-sized electro, packed full of bells and whistles, and with some seductive curves, this is an awful lot of guitar in a pint-sized footprint.

You may baulk at the idea of putting down your dreadnought in favour of something more petite, but fear not - you don't need to be a fingerstyle purist to enjoy this guitar (although it sounds utterly bewitching if you do).

Strummed, the Faith is brash and surprisingly boisterous. There's plenty of volume, but more importantly, there's also a rich, responsive tone with a bright, lively top-end. The shallow C profile neck is sleek and beautifully finished - a statement that befits the whole instrument. The attention to detail here is impressive, and there are plenty of details to get right, from the flawless high-gloss finish to the binding, well-suited abalone rosette and mother-of-pearl inlay at the 12th fret.

Faith certainly puts the emphasis in all the right places, with tone and build quality at the top of the list, but looks have been given an equal billing. That cutaway - or should that be scoop - stands out straight away. Inspired by Faith endorsee Beth Nielsen Chapman, it's an artfully executed quirk that catches the eye, and allows for easier access to the top frets.

The Eclipse Mercury also boasts the thoroughly impressive Shadow Hex preamp, which transforms it from a powerful small-bodied acoustic into a compelling proposition. Aside from the usual features (built-in tuner, treble, mid and tone controls), the Shadow Hex has six individual trim controls for each string, and a pan knob.

When the pan control is over to the left, you've got a standard mono-output electro, but spin it to the right and it kicks into stereo. With a stereo Y cable, you can broaden your sound field, with each string occupying its own space on the spectrum and adjustable with a fingernail or plectrum. It's mightily impressive, and though it sounds complicated, in reality it's gloriously simple.