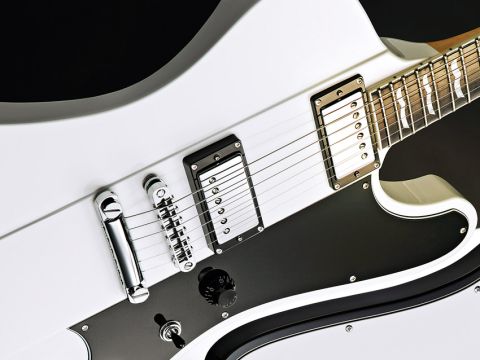 This is impressive indeed. More versatile than the guitar that inspired it, it's well worth a look… and not only by rock and metal players.

During the eighties and nineties, ESP's sell-line was "the only real alternative", a barely disguised statement of intent to illustrate the occasional practice of taking classic designs and reinventing them to suit what it believed were the needs of contemporary players.

The recently resurrected Phoenix body shape doesn't so much suggest the Gibson Firebird as hammer it home - the phoenix is a firebird in Greek mythology - but there are several refinements to the original 1963 Ray Dietrich Gibson design.

"The original Phoenix made its debut in the mid-eighties and it had a pointed headstock, two mini humbuckers and Floyd Rose-type locking tremolo," says ESP Japan's President, Makoto Suzuki.

"It was discontinued in the early nineties and the Phoenix-II was introduced in 2008. I personally love its shape and I'd been thinking about bringing Phoenix back to the market for a while."

Its construction style is similar to that of the Firebird, although the materials differ. Here the neck and central core of the body is comprised of a three-piece spread of maple that runs from the tip of the reverse headstock to the rear strap pin, flanked by mahogany wings.

An obvious nod to its inspiration comes with the two raised edges either side of the pickups, but there are also modest forearm and belly contours to consider, as well as a lower horn that resembles that of an Ibanez Iceman.

Suzuki-san is right about the mini humbuckers, but here the guitar comes loaded with a Seymour Duncan JB/'59 set complete with chrome covers. Unusually the controls consist of two volume pots alongside the customary three-way toggle switch - we'll see if the lack of a tone pot compromises its performance.

It's good to see high-end hardware and fittings that raise stability and performance as high as realistically possible at this price point. The tune-o-matic bridge and stud tailpiece are locking TonePros parts, while a complement of ESP locking tuners adorns the eye-catching headstock.

A low-friction compensated Earvana nut is the icing on the cake and the guitar is perfectly set-up out of the box. As far as playability is concerned, the Phoenix does take a little getting used to when strumming sitting down, simply because the first few frets are that much further away from your body, even with its time-honoured Fender scale length.

Any weirdness dissipates when standing, as the guitar as a whole hangs well and the bound neck, which follows ESP's 'Thin U' contour, is eminently playable. White and black finish options seem like the right choices for rockers, but could we have a two-colour sunburst one as well perhaps?

For rock styles the Phoenix is superb. Thanks to the maple core and the lack of a principal top horn as such, it isn't as dark and bottom-end dominant as some Les Pauls can be.

Like the guitar that inspired it, the core tone is strident and balanced, the combination of mahogany, maple and pickup choice simply bang on for chording, riffing in rock, metal or fiery blues styles.

We've sung the praises of this specific Seymour Duncan pickup set on many occasions. The JB's characteristic rasp seems to work especially well here; perhaps as the Phoenix is no lightweight, it needs a spirited pickup to take control.

The neck-placed '59 gives a similarly impressive performance in that it has that kind of 'proper guitar' depth and character that's missing from many models further down the food chain.

Metal tones benefit greatly from this additional depth and the string clarity at this end of the scale is a big plus. Some people may insist on active pickups for heavy styles, but here solos and rhythm styles are powerful and dynamic without the sibilant, compressed feel of actives.

As this is likely to be predominantly a rock instrument, we did find ourselves defaulting to higher amp gain settings for the majority of our testing, but used cleanly it's just as impressive.

The fattest tone in that regard is with both pickups combined, as the treble is rounded off nicely, but we concede that to attain fat, jazzy tones, a tone pot would have been nice - it's a surprising omission.

The Ltd Phoenix just misses blatant Firebird rip-off status, thanks to its marginally altered body and peghead outlines. Add the quality pickup complement and it suits a wide selection of styles, even if its most likely players are rockers and metallers who want to stand out visually.

It is significantly less expensive than the Japanese-built ESP-branded model - and more or less the same spec - but over £1,000 still feels steep alongside Epiphone, and even Gibson Firebirds. Still, the quality in build, materials, tone and finish is undeniable in this highly likeable guitar.