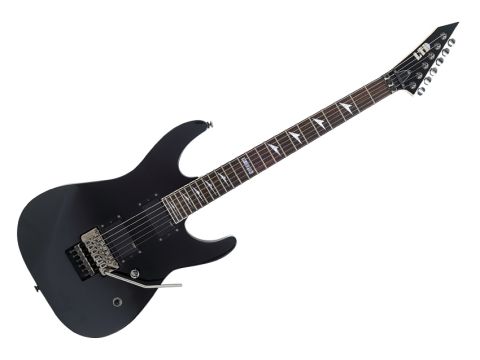 As a metal guitar it's disappointing, but clean tones are decent.

Like most mainstream guitar companies, ESP constantly strives to identify gaps in both the market as a whole and within its own catalogue; after all, where there's opportunity, there's the chance to make a nice wedge.

Thanks to the endorsement of a number of A-list metal bands, not least Metallica, Slayer and Children Of Bodom, the vibe of many ESP and the firm's lower priced LTD guitars is intertwined with the dark art of high-octane rock - boasting active pickups, fast necks and a sturdy construction.

This shiny new Indonesian-made LTD 330 Series subscribes wholeheartedly to the ideal. Aimed at players who are meagre of pocket but flush with ambition, it fits snugly between the cheaper end of the catalogue and those models suited to semi-pro players with a bigger budget. Each of the five incumbents feature a bolt-on neck, just one choice of finish per model and come loaded with the new ESP-branded active ALH-200 pickups.

"The new ALH-200 set features ceramic bar magnets to cover any string spacing and to give plenty of punch along with the moderate output coil windings," ESP tells us. "Although active, we wanted to keep more of an organic sound, so players will notice that our pickups do offer a moderate amount of gain, and we feel that players can actually use our active pickups with their existing amps and not feel like they are completely changing their sound."

The M Series offers a more than reasonable compromise for Metallica fans who aspire to owning a full-on Kirk Hammett model but can't afford it - the M-330R is unique in the range in that it's the only one to feature a reverse headstock. Like the MH-330FR, it also offers a double-locking vibrato - a Floyd Rose Special - and a traditional three-way toggle selects the pickups.

The rosewood 'board is bound in white, and the maple neck itself is cut out from a spread of maple comprising several 19mm sections. It offers certainly the widest and flattest feel of all four guitars here and, as with all 330 models, it is a bolt-on.

The heel has been shaped to ease access to the higher frets, which leads to a trapezoid rather than rectangular four-screw neck plate, and the mahogany body has been finished in the only possible hue: gloss black.

Active pickups are more versatile than many give them credit for - they have any number of uses outside of the metal tones they are often associated with. But that said, our first port of call for our sound test is to dial-in a scooped crunch.

Initially, the bridge pickup sounds too bright and provides less in the way of bass depth and girth. In addition, the middle seems overpowering at times, giving less of a Black album-style crunch and more of an unattractive bark.