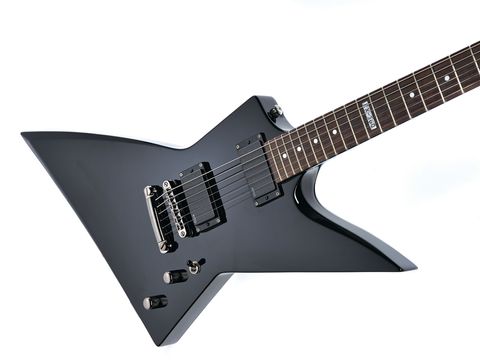 With its extra grunt and tonal versatility, we'd go with function over form, dress down and tool up with the EX-360.

Sleek and sharp, all kinetic angles with a bulk befitting a scale model of a Star Destroyer, the EX-360 looks like some weaponised guitar from the future.

Yet design-wise it's an antique, a bona fide classic whose genetic lineage stretches back to the 1958 debut of the Gibson Explorer.

"LTD has done a great job in balancing a super-hot active pickup with an expanse of solid tonewood to truly do the pickups justice."

The angles have been sharpened, but that asymmetric body shape is unmistakably Explorer. In 1958 it was ahead of its time for an electric guitar to capture the imagination, and only when James Hetfield of Metallica became synonymous with the Explorer did the guitar become an icon.

In truth, that synonymous-with-Hetfield quality is hardwired to the EX-360's DNA - even the pickup configuration, with the EMG 60 in the neck and 81 on the bridge, is classic Hetfield. Metallica fans will be all over the chance to be able to go some way in recreating Jaymez's tone for less than £700.

The EX-360 is all about the heft. Just fire up your amp, add plenty of gain, and play an open E: there's a bestial quality to its tone that'd transpose even the most mundane riff into something sinister and worthy.

The EX-360 is about deep, warm tones. EMG pickups are awesome, an essential piece of kit for dealing with down-tuned guitars and high-gain rough and tumble, yet on some guitars they can lack the warmth that characterises, say, the EX-360's Gibson-crafted design muse.

That's not the case here; LTD has done a great job in balancing a super-hot active pickup with an expanse of solid tonewood to truly do the pickups justice. The sustain, harmonic liveliness and jumbo frets are all there for lead playing, too.

The EX-360's neck is comfortable, with a profile thin enough to help modernise a classic design into an electric that's a superlative all-rounder for contemporary metal. The variety of tone is incredible, especially for Metallica fans - whether playing cleans with the neck pickup and a little modulation, or riffing hard on the bridge pickup and the gain maxed out, the EX-360 is capable of tones eerily similar to its hero's.