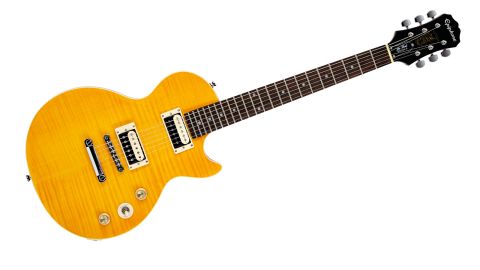 What it lacks in tone, it more than makes up for in value for money. Beginners could do a lot worse than this affordable Slash-er.

The AFD Les Paul also comes as part of Epiphone's excellent AFD Performance Pack, but here we're focussing on the guitar itself, which is aimed at guitarists taking their first steps in rock.

The differences in spec between this and a classic Les Paul include a bolt-on neck, reduced control panel and the resitting of the three-way toggle to between the two pots.

The mahogany body, resplendent in a flamed maple veneer finished in Appetite Amber, is thinner than on a Gibson LP, too.

Loaded into the guitar are two of Epiphone's new - and exceedingly powerful - Ceramic Plus humbuckers; plus, built into the bridge pickup ring is a Shadow E-Tuner, activated via a small push- button on the ring - handy.

The action's a little too low and the rosewood fingerboard is overly dry straight out of the box; but that doesn't take long to rectify, and our first impressions of the rock tone were positive.

Although it's not especially dynamic and doesn't react well to bending two or three of the higher strings at a time, the bridge pickup sounds fine; the neck pickup, however, is a little dark and underwhelming.

It's unfair to compare its performance with the other Slash-endorsed instruments higher up the range, and any misgivings we have are more than washed away by the great price.