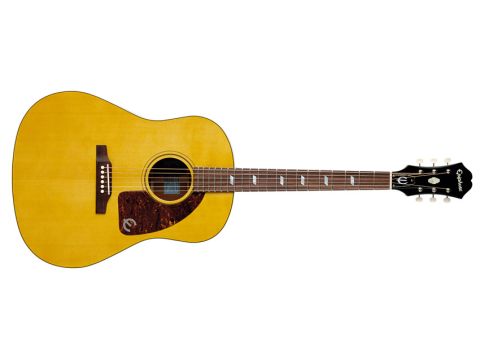 An affordable and likeable version of what is a classic guitar with bags of history.

Few guitar brands evoke old-world images like Epiphone. The Epiphone story started late in the 19th century when a luthier and violin maker named Anastasios Stathopoulo, the son of a Greek timber merchant, moved his family to New York in search of a better life.

The 'House of Stathopoulo' was opened in 1873 producing lutes, violins and other instruments. In 1910 Anastasios drafted his 17-year-old son, Epaminodas (also known as 'Epi') into the company. The instruments produced from thereon took the son's name and Epiphone began its road to worldwide success and notoriety.

Internal problems in the mid- 1940s led to financial problems for the company, which by this time was losing ground to the likes of Martin, Rickenbacker, Fender and Gibson. A brief phone call from Epiphone's owner, Orphie Stathopoulo (younger brother of Epi) to Gibson's general manager, Ted McCarty, led to Gibson taking control of Epiphone in May 1957 for $20,000.

Under new ownership, existing product lines were relaunched while budget-conscious versions of Gibson products were introduced to the range. The formula was a winning one and with the help of Messrs McCartney and Lennon, who were users of Epiphones during The Beatles' early years, Epi took on the world.

Famously, the world's most played, heard and covered song ever, Yesterday, was written and recorded using an Epiphone 64 Texan. Further consolidating Epiphone's acoustic credentials, McCartney authorised the release of the Paul McCartney 1964 USA Texan in 2005, a limited run, identical slope-shouldered dreadnought. It's reported that McCartney genuinely couldn't tell the difference between the limited editions and his own guitar.

On review here is a more affordable version of that same guitar. Epiphone is seeking to offer a vintage-style model with traditional appointments.

Since its introduction in 1958, the Epiphone Texan has been used by a number of high profile musicians including Peter Frampton, Noel Gallagher and, of course, Paul McCartney.

The new 64 Texan is a visually striking guitar. The silver 'E' fitted to the big-block pickguard, the reverse bridge, the slope-shoulders and mother-of-pearl parallelogram fretboard inlays all give this guitar an air of familiarity. Opening the case gives the same feeling as meeting up with an old friend that you haven't seen for 20 years.

Slope-shoulder dreadnoughts have a slim waist, which often leads to a more balanced tone with a clearer mid-range as well as being bell-like in shape. Structurally speaking, the 64 Texan is a well-balanced guitar and very comfortable to play.

The solid spruce top has an aged, antique hue to it that contrasts well with the bright, near-orange, mahogany back and sides of the guitar. Rosewood has been used for the fingerboard and reverse-style bridge, which holds a compensated Tusq saddle.

The two-piece mahogany neck is the same sixties-style Slim Taper D shape as the DR-500, though Epiphone has chosen to finish it in a high-gloss. This is a shame as the speedy feel of the slim neck is compromised by the 'slower' gloss finish, and we can't help thinking that a satin finish would have been a better choice.

We particularly like the headstock shape. Though not immediately obvious, the headstock flanks have been subtly shaped to create layered contours. Vintage-style 14:1 ratio tuners are fitted with classic, oval-shaped cream buttons. The overall aged look to the guitar is underlined by Epiphone's use of the original 1960s blue rectangular soundhole label.

Shadow provides the powering with a Sonic NanoFlex low-impedance, undersaddle pickup. The preamp's controls include volume, bass and treble disc-rotaries and the unit is mounted just within the upper side of the soundhole.

Though its positioning is discrete, we found it somewhat awkward to access. Adjustments to the controls require the guitar being flipped upside down close to your face (Hendrix playing with teeth-style) to be able to locate the correct rotary - not ideal for adjustments on the fly.

The preamp is powered by two 2032-type lithium batteries, and a useful LED battery indicator lights up 30 minutes before they are due to expire.

Overall the 64 Texan is a well presented guitar with no real concerns over construction standards or quality control.

With a powerful mid-range, the 64 Texan packs bags of punch, volume and clarity if not character. While the string spacing isn't particularly suited to it, finger-style benefits from a full, precise output, while the overall tone lends itself to percussive, choppy chord work.

The plugged-in tone is similar in character to its acoustic voice. The Shadow electronics throw out an in-your-face rasp well-suited to a duo/band setting. With plenty of volume and midrange, single note runs and solos ring out clearly.

In terms of tonal versatility, we found it difficult to warm things up a little, even when rolling the treble right off. While not being all things to everyone in terms of tone, what the 64 Texan does, it does well.

Epiphone, as ever, has produced a great vintage-looking guitar that benefits from a little modern technology. It might not be the most flexible guitar on the market, but what it does, it does well. And for excellent value for money too, so what's not to like?