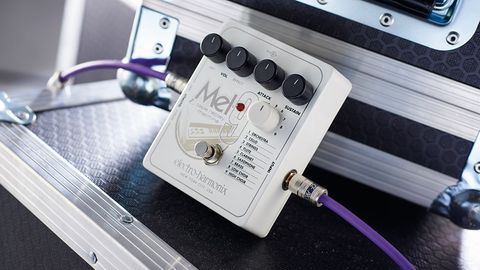 Guitarists with MIDI guitars have had access to Mellotron sounds before, but this is the first time any six-stringer can recreate that vintage vibe from a plug-in-and-play pedal.

Electro-Harmonix has created a bit of a mini industry with stompboxes that give your guitar the sound of a vintage keyboard instrument.

Using similar technology to that implemented in its POG, the company has emulated organs with its B9 and C9 Organ Machines and given us the sound of various electric pianos with the KEY9. This time, it's the turn of the Mellotron...

Now, while not everyone reading this will know what a Mellotron is, you will all have heard one in the instantly recognisable opening of The Beatles' Strawberry Fields Forever, probably the most famous studio use of the instrument.

It was also featured at various times by Led Zeppelin and The Rolling Stones, and is regarded in some quarters as the sound of progressive rock, making a defining contribution to the sounds of bands such as The Moody Blues, King Crimson and Genesis. You'll hear it in more contemporary bands as well, including Oasis and Radiohead.

The Mellotron was, in fact, the very first sample playback keyboard, but, dating from the 1960s, there was nothing digital about it. It featured an electro-mechanical system utilising lengths of analogue tape to recreate the sounds of real instruments, including rhythms and accompaniment fills (such as the flamenco guitar at the start of The Fabs' Bungalow Bill), plus special effects. For the record, Strawberry Fields' opening was played by Paul McCartney using the flute sound from the Mark II Mellotron.

For the MEL9, Electro-Harmonix has gone for straight instrument and choir sounds and equipped the pedal with nine preset sounds based on original Mellotron tapes, selected via a rotary switch. You get separate volume knobs for the dry sound and the effect, as well as Attack and Sustain knobs.

There's also an extra output that passes the dry signal, as heard at the input at all times, so that you can have a standard guitar signal chain totally separate from the Mellotron sounds.

For the full Mellotron effect, we start by keeping the dry sound turned down and audition each preset. The sounds flow quite naturally from your played notes, although you may have to watch your technique on some sounds - vibrato on the brass sound doesn't go well!

The Attack knob changes the envelope, effectively setting how the Mellotron sound swells in, so at minimum we hear the full sound instantly, but you can turn it up for more gradual fade-ins. Sustain sets the amount of time it takes for the Mellotron sounds to die out after you stop playing, and as each sound is quite ambient, there's a natural reverb tail on the fade.

The sounds are a mixed bag. Some offer a reasonably authentic take on the instrument(s) that they represent, others less so, although it very much depends on the context in which you use them. You will be able to play a very representative Strawberry Fields-like intro using the flute sound and you can reproduce a solo cello very nicely by playing notes in the correct range, but it's very doubtful you'll put a sax player out of a job with this pedal. Perhaps that's not the point, though.

Not everyone will want to use full instrument sounds 'naked', because the MEL9 can offer whatever hybrid mix of guitar and Mellotron you desire, including playing in unison. It's also extremely capable of providing the sort of keyboard pads that can sit subtly behind your guitar sound - just turn the dry guitar up and feed in a little of the effect knob until the blend is just right, adjusting the flavour with the Attack and Sustain knobs.

Strings sound great in this context and the High Choir is one that really lends itself to this use, offering a similar sort of vibe to that provided by reverb pedals with a shimmer function - add an extra bit of hall reverb and you'll have a heavenly choir of angels tracking your every note and chord. Very prog!

If you have a keyboard player in your band, something like this may be irrelevant, but if those vintage Mellotron sounds, triggered from guitar, could play a part in your own music or perhaps enhance or enable the playing of covers from a certain period, this could be a worthwhile addition to your pedalboard. Another way to look at it is to forget the Mellotron tag and see it as a tool to add textures behind your guitar, a role in which this pedal is more than capable.