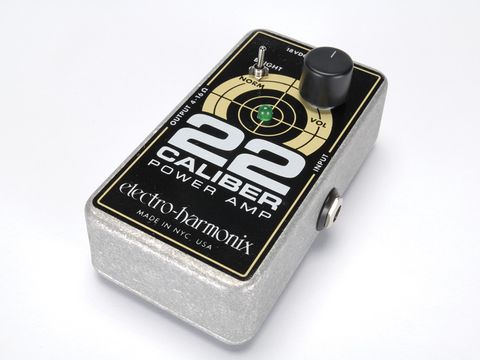 Buy one, pop it in your gigbag and you'll never fall foul of a popped fuse or busted valve again.

We need to clear a few things up before we get into the 22 Caliber. It's not an effects pedal, a DI box, or a booster; nor is it even a preamp. It is, in fact, a 22-watt power amp that's been squeezed into a chassis measuring a mere 110mm by 55mm and is compatible with any speaker cab with a rating of between four and 16 ohms.

Imagine it's a traditional amp, and treat it in exactly the same way. So, you plug your guitar into the input and from the output you'll need to run a speaker cable into the input of a speaker cab. Controls comprise merely a volume pot plus a bright/norm switch that adds or reduces tonal bite.

It's entirely possible to run your effects chain straight into the input and, if you require some more tonal versatility, it's likely that you'll actually need to utilise an overdrive device of some description.

Having said that, as with a traditional amplifier, the higher you wind the volume control, the fatter and dirtier the tone gets and, through an Orange 2 x 12 cab, the tone is absolutely huge.

Here are three clips, the first with the bright switch engaged and the volume on three:

Next, the normal setting, volume on six:

Finally here's the same setting with the volume wide open:

The 22 Caliber offers that organic and wide-open overdrive that will attract QOTSA fans in their droves, but with a modern overdrive pedal in front of it, it reacts just as you'd hope.

Although perfectly usable in its own right, we reckon this is the perfect solution to 'broken amp syndrome'.