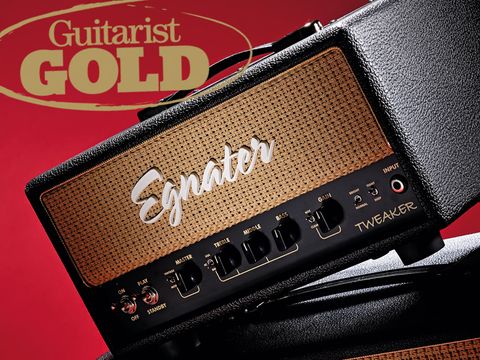 Bruce Egnater may not be that well known in the UK, but his reputation as one of the world's top amplifier designers is assured. With a stellar career spanning 35 years, Bruce's customers have included some of the biggest names in rock and metal.

These include Dimebag Darrell, Nuno Bettencourt and Steve Vai, as well as consultancies with Rocktron and Randall (who license Bruce's modular concept).

Based in Berkeley, Michigan, Egnater has always run his own custom shop, but is presently focused on a groundbreaking series of Chinese-built amps that have taken most of the world by storm in the past couple of years. Recently we looked at the Rebel 30 combo, but now it's the turn of the small but perfectly formed Tweaker.

Many so-called 'micro-amps' use simple metal box cases, mainly because they're easy to put together. By comparison the Tweaker is a conventional head, just smaller than average, with a neatly built and finished ply cabinet that's been covered in a thick-grained vinyl.

The head's front and that of the matching speaker cabinet is covered in a tough basket-weave grille and edged with gold piping, with vented rear grilles on both boxes to protect the valves and speakers. There's another grille on top of the Tweaker's cabinet, which is large enough to access the power valves once it's removed - a nice touch.

The amp chassis is a solid steel box with spot-welded corners and more ventilation slots. It's thicker than some US-made amps and needs to be, as it supports two substantial transformers.

The Tweaker's electronics are neatly arranged on two high quality printed circuit boards, one for the preamp and one for the power stage. These hold all the valve bases as well as the front and rear panel components.

Despite the PCBs, there's still a fair amount of wiring, which is all carefully routed and tied together. The layout is neat and tidy and the components are of a very high standard.

Operationally, the Tweaker appears at first glance to be a simple one-channel design, with controls for gain, three-band EQ and master volume. However, the five small switches on the front panel hold the keys to a vastly expanded tonal palette.

"Our product development method is basically by group decision," explains Egnater. "Often, final product designs barely resemble the original concept. The Tweaker is one of those products. My original idea was to have little plug-in modules - called Tweakards - that would change the tone, gain, EQ and so on.

"This was a fun idea, but not very practical. Because I think like a guitar-playing engineer, I have a tendency to overcomplicate things. One of our design team asked if we could just put those Tweakard functions on toggle switches. This was an obvious, ingenious idea so we did it.

"The vintage/modern switch is in the power amp. In vintage mode the power amp is basically flat - not in a bad way - while the modern setting bumps up the low and high-end for a little fuller, clearer tone.

Around the back, the Tweaker has a pair of sockets for its series effects loop and two more for loudspeaker cabinets, along with an impedance changer and switchable mains voltage. The overall impression is one of tough, robust reliability combined with style and attention to detail that's way above what you might expect in this price bracket.

For our test we selected a variety of guitars: a Duncan Alnico Pro-equipped Strat, a Fender Custom Shop '51 Nocaster and a '94 PRS McCarty. The Egnater's cleaner sounds have a nice bright edge to them that isn't harsh or piercing, with a generous bass response that's easily tamed at higher gain settings using the tight switch; the bright switch works to add a little extra sparkle to humbuckers.

The gain switch offers a wide range of clean to mildly overdriven sounds in its clean position, while flipping to hot adds significant extra distortion that sounds fantastic for classic rock or metal, even with a relatively low output guitar.

The EQ switch's three modes move from scooped mid-range with a round bass and bright treble to a more aggressive mid tonality with tighter bass. While in the AC position there's a characteristic 'boxy' midrange grind that's definitely reminiscent of a Vox.

The vintage/modern switch adds more punch and presence in modern mode and we prefer this to the vintage setting. The Tweaker's three tone controls interact smoothly and predictably: as long as you don't go overboard with the master volume there's a lot of subtlety and depth no matter where the switches are set.

As you turn the master up to maximum, the tone set-up's effectiveness diminishes, which is to be expected as the sound of a pair of driven 6V6s takes over. This is pointed out in the manual - which is to be commended for its informative approach.

While the amp is plenty loud enough for small gigs with just the one speaker, the addition of another 1 x 12 extension cab would increase the Tweaker's headroom. In the studio, the Egnater's bouncy response makes it easy to play in a dead acoustic environment; it flatters averagely good guitars and makes top-drawer instruments sound incredible, with only a little compression required for truly killer recorded sounds.

This little amp's range and capability is going to appeal to a very broad range of players, from amateur bedroom heroes to professionals working in the most demanding live or studio environments.

When it comes to value for money the Tweaker is off the scale, delivering build quality that eclipses practically every offshore amp we've seen, while most of the serious sonic competition comes from products costing upwards of three times the price.

Some might wish for the gain boost to be foot-switchable, but any player who knows how to drive an amp using the guitar's volume control can easily get around that.

While it shares some of the Rebel 30's panache, the Tweaker clearly has its own character. "I don't know that there's really an Egnater sound, per se," says Bruce. "We're recognised for a smooth, singing high gain tone, which has been one of our trademark sounds forever. Nevertheless, each design is created to have what we hope is a unique voice of its own. Our motto is Tone First - that's what we live for."

Amen to that. The Tweaker has already become a phenomenal success in the USA and we think it's going to be equally popular here and, beyond any doubt, is worthy of a five star rating.

Now listen to our audio demo to hear the Tweaker in action: