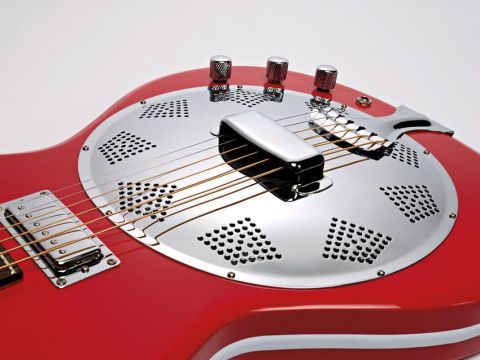 No only does the Folkstar have some seriously sexy vintage looks, but an impressive tone to match.

Canadian-based luthier Eastwood has been making our extremities tingle with some righteous six-string eye candy for a few years now. Its new Airline Folkstar resonator guitar, based on an obscure '60s Supro-branded pawnshop prize, isn't about to break that hot streak.

Yet again, Eastwood has matched the mojo of an old guitar with the playability we expect from modern instruments. The Supro's fibreglass body has been updated to chambered mahogany and you now get a pair of pickups: a bridge piezo and a mini-humbucker at the neck. The '60s model was an acoustic and not a great one at that, apparently.

You're probably more familiar with the resonator sound than you realise. That unique tone is all over vintage blues, bluegrass, and even pop music.

For example, Mark Knopfler played one on the intro of Dire Straits' Romeo And Juliet. Listen to a resonator blow its beans on The Kink's cross-dressing classic Lola and that cool intro riff from The Fun Lovin' Criminal by Fun Lovin' Criminals, natch.

Resonators have a mechanical 'cone' that vibrates to amplify the strings and produce a bright tone, not a million miles away from that of a banjo. They don't sustain quite the same way as regular acoustic guitars. Hit them hard, get the cones moving and you'll release the tone.

Unlike the usual acoustic-based resonators, the Folkstar has a thin body and a slim neck profile. Ours came with a low action so playing the thing was a breeze in spite of the heavy .016 to .056 gauge strings, which keep the tuning rock solid.

Plugging in, you can mix between the bridge and neck pickups with the blend control. The bridge piezo produces the classic resonator tone through the clean channel. Add some reverb and a bottleneck for some Delta blues heaven.

The neck 'bucker was a revelation - a full-bodied tone machine that's perfect for jazz chords and rockabilly licks.

The Airline Folkstar helps make the transition from a regular electric guitar to a resonator as easy as pie. Don't let the heavy strings scare you; the Folkstar's infectious tone makes the extra effort worthwhile, especially when you dial in that fantastic neck pickup.

Thanks to great tone, playability and a healthy slice of vintage mojo we couldn't put the Folkstar down. We reckon the price is all good too. Yep, it's safe to say that this guitar, ahem, resonated with us. ...