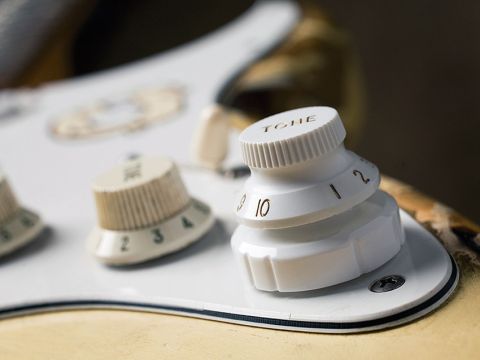 The Tone Lifter is a powerful onboard tone modifier if you don't fancy pedals for extra boost and EQ manipulation.

You might think active circuits are the preserve of bass players. Yet there's been a trickle of retrofit pots and switches over the years that let you supercharge your six-string.

The latest comes from a company with form in the bass arena, East UK, whose main man John East has now turned his talents to the not-so-humble Fender Strat.

The Tone Lifter is a dual-mode circuit that replaces the second tone pot in Strat-style guitars. When the top knob is rolled clockwise from its centre detent you have a variable mid boost of up to 15dB, and rolled anticlockwise, you have a bass and treble boost.

Fitting is designed to be as simple as possible, without any need for soldering, and leaving the guitar easy to return to standard spec. The included instructions are detailed and sympathetic to undoing the mod. You can do it yourself if you're comfortable with guitar innards, but if you're not, have it done by a tech.

New components include a jack socket - the Tone Lifter charges its battery through an included jack plugged PSU - the main dual-concentric pot and circuit board arrangement, and the battery and battery status LED.

East UK suggests that once everything is mounted, the battery pack should sit on the existing volume and tone pots, cable tied securely and cushioned with a piece of packing foam - we told you the instructions were detailed…

You start by removing the old tone control and jack socket, then fit the Tone Lifter jack and circuit board. Wiring it is a case of de-attaching and stripping back certain wires, and fixing them to the screw positions on the circuit board assembly.

If you want, you can also mount the included battery charge status LED in the pickguard, necessitating an extra hole. East UK is mindful of non-reversible mods, so suggests fastening the LED near to your pickup selector so it's visible through the slot: we wired it in the pictured guitar above and it works a treat, glowing red when charging, green when it's done - fully flat to full charge takes around four hours.

Usefully, the system is fully bypassed with the top knob in the down position, so you can still play in normal passive mode even if the battery is flat.

Pulling up the top knob and rotating forwards (turning up) is mid-boost mode. This can easily take a clean amp into distortion with the full 15dB, or push as already distorted amp into heavy clip.

The lower ring changes the mid frequency itself, which means you can make it sound fatter or thinner as you require, from nasal, part-cocked wah-type tones, more subtle, fuller, rounder boosts and on to woolly barks. Clapton's Strat mid-boost circuit comes to mind, though here you have much wider frequency control.

In anticlockwise mode, the level of bass and treble boost can again go to extremes, to the point where your Strat can end up sounding harsh and brittle, not unlike a piezo-equipped acoustic.

That may well be a useful application, of course, but more versatile are the subtler settings, for example adding a punchy, hi-fi sheen to clean tones: think ultra-Knopfler and then some.

Likewise, if you're into on-the-edge blues tones, this can really accentuate highs and lows if they're flattened by an overdriving valve amp. With such a wide range of boosted frequencies available, results with overdrive, distortion or any pedal for that matter are interesting.

If you've a mind to experiment, you can accentuate or temper a stomper's intrinsic sound to a lesser or greater degree for a whole raft of new sounds.

Despite East UK's care and attention in making the Tone Lifter a non-destructive mod in terms of fitting, the main bone of contention for many players will be the visual destruction in terms of the bulk of that dual-concentric pot. If you can get over that, and the not inconsiderable £169, it does offer a significant tonal kick for your Strat. Power to the polepiece indeed.